Thank you for all of your comments and e-mails on my last post about Ella's science project. I showed them to her, and I think they helped with the disappointment.

The GPS on the phone stopped when it was about 20 miles from our house - 290 and Burleson for those who know Austin. Elizabeth and I took a field trip all the way in to the last recorded location, which turned out to be a Honda dealership. Then we spent half an hour wandering through the employee parking lot, looking under cars. At one point I thought I'd spotted the payload and got really excited. But it was just a styrofoam to-go container someone had thrown under a car.

We have two theories about what happened.

a. At that point, the balloon got above 30,000 feet, which is about the height that cell phones can no longer pick up a signal. Cell phone towers are very good at sending signals out horizontally, not so much vertically.

b. The phone froze, literally. One of things we had to sacrifice in our attempts to make the payload light enough was the handwarmer that was supposed to protect everything from the coldness of space. So it's entirely possible that the project was a success but that the phone died.

At any rate, we have the phone set so that if anyone finds it and manages to get it to power back up, it will display a message asking the finder to call us. So far, no calls. I'll leave the phone activated on our account through the end of the week and then shut it down.

Fortunately, Ella had another project to finish, which provided a distraction. For math class, the students had to build a toothpick tower that was at least four inches tall and that could support the weight of a baseball. The class worked together to come up with rules about how many toothpicks could be next to each other in a bundle and what supplemental materials were allowed.

Ella's tower is made of 940 toothpicks and an entire bottle of Elmer's glue. 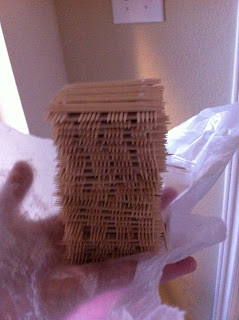 On Friday, Ella's class will go to the weight room and see whose tower can hold the most weight. Given the amount of glue in Ella's, I'm guessing hers will be one of the strongest.

Now we're on to making a Roman shield out of a tri-fold board and duct tape.

Why does every project have to be so sticky?
Posted by hokgardner at 9:16 PM

Maybe her next project should be about adhesive - kill two birds with one stone?
Sorry to hear about the loss of signal - that's a risk that's hard to control. Remember a few years ago when a Mars explorer crashed because they forgot to convert feet to meters? Remind her that she didn't make any dumb mistakes like that! If you ever need to support a persons weight with a sheet a paper, we know the secret on that one.

Sad that you lost the payload... But I'm sure Ella's project was a success anyway!

For future reference Tacky Glue is one of the best glues to use on school projects that will be bearing weight. In high school physics we had to build a bridge out of Popsicle sticks and then weight test them to failure. The only glue my mom had at home was Tacky Glue, so I used it. It took forever to dry, but the hidden benefit of Tacky Glue is that it is flexible once it dries unlike Elmer's glue which will crack and seperate. We set up our bridges and hung a bucket from them that we added weights to so that we could see how well they withstood weight. Mine was the only one that they couldn't break with the weights we had available. So as an alternative way to try and break my bridge they had a 250lb football player stand on it. When that didn't work, the football player and a similar sized friend held on to each other to stand on the bridge and it still wouldn't break. Ever since then I have loved Tacky Glue and will always use it when I need a flexible hold. (hot glue has never been my thing)

Please blow something up