When I was little, we moved to a small town outside Albany, NY called West Sand Lake. It was a very Rockwell-esque place. There was a Woolworth's and the annual Dairy Festival parade. My babysitter was Dairy Festival Queen one year. There wasn't a whole lot to do, other than go to swimming holes, go fishing, and have clambakes. At least those are my memories of the place.

As with many small towns, West Sand Lake had a volunteer fire department. When we moved to West Sand Lake in 1973, my dad, AKA runnerdude, joined the VFD. Some of my earliest memories involve his being a firefighter. I remember going to the fire station with him to raise and lower the flag, I remember getting to explore the fire trucks, I remember the big radio thing in his closet that went off when there was a fire.

Runnerdude served on the WSLVFD until we moved to Massachusetts in 1976.

At some point this fall, runnerdude mentioned to Campbell that he had been a firefighter, and Campbell's eyes got all big. This started me wondering. Did the WSLVFD still exist? Did they sell t-shirts or hats? Could I get one for runnerdude?

Thanks to da googles, I found the West Sand Lake Volunteer Fire Department website in about 10 seconds. Further exploring turned up an e-mail address for the president. So I sent off a note about how my dad had been a member in the 70s and was there any way I could get him a shirt. I really didn't hold out much hope for a response.

One random evening, my phone rang displaying the 518 area code for Albany. This puzzled me, because while I still have family there, they aren't likely to be calling. Instead it was the head of the WSLVFD membership committee calling about my e-mail. I'll call him Larry.

I think he was as delighted to talk to me as I was to him. He had me on speakerphone with his wife in the background. He explained that it took so long to reply because they wanted to verify that runnerdude really had been a member. This involved going to the old fire station, climbing in to the attic and sorting through 40-year-old log books. But they found the one that contained runnerdude's information.

Larry said that he had taken my request and the log book with runnerdude's registration to the membership meeting and put it to a vote. They voted unanimously to send runnerdude a shirt.

I had a hard time keeping this whole thing secret from runnerdude. I almost slipped up and mentioned the shirt or the call from Larry any number of times. But I'm glad I succeeded. The look on runnerdude's face when he opened the box and then realized what the shirt was was priceless. And he loved the story of Larry's calling to chat. 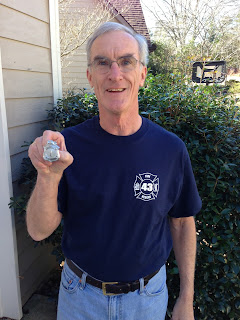 Runnerdude still has his fireman's badge. I sent this picture along with a note from runnerdude off to the WSLVFD thanking them for sending the shirt.

I love those moments when great ideas work out. It doesn't happen very often but when it happens its worth celebrating.

Yea Heather- I will not be as good as that on my best gift day ever. You rock.