Not a viable career choice

This week at school, Campbell's class has been discussing careers. The teachers have asked parents to send in short videos of themselves at their work place explaining what they do for a living. I don't think a video of me sitting at my kitchen table in my pajamas, drinking tea and cursing writer's block will be of much interest to the kids.

One of the assignments for the week was to have the kids draw a picture or make a collage representing what they want to be when they grow up. When I told Campbell what he had to do, he looked stricken. "But I'm only 6! I don't know yet."

After Lily and I reassured him that he could, in fact, change his mind at a later time, he hustled off to draw his picture. 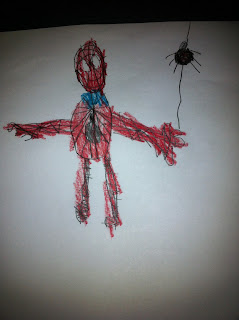 Campbell's whole career path depends on his being bitten by a radioactive spider.
Posted by hokgardner at 7:26 AM

Well, out there in the boonies, you never know what might be lurking in the woods. muhaha!

Love it. William's at the same age (maybe it was Kindergarten) was to be a radio pronouncer.

My son used to want to be a "magician bus driver." He's changed his mind, though, and now he wants to be Spiderman. So, if you do find a radioactive spider, let me know!

You know, they re-make the films every few years - maybe he'll be an actor playing Spiderman.