The Princess and the Queen

A few weeks ago, my sister sent me a link to an article about an exhibit of Princess Diana's dresses on the Queen Mary in Long Beach.  The ensuing text messages went something like this:

Me: OMG!
Sarah: OMG good or OMG terrible?
Me: OMG jealous. I would love to see that.
Sarah: Come out to visit.

I went out to visit, and we went to the Queen Mary. The exhibit did not come anywhere close to living up to our expectations. After we left Sarah said, "I'd apologize for dragging you to that, but there was no way to know ahead of time." I pointed out that I'd been a willing participant.


We started with a tour of the Queen Mary, which is a cruise ship permanently docked in Long Beach. In its glory days, it was one of the poshest ships and movies stars and quasi-royals sailed on her. Now it's a kind of shabby hotel and special events venue. Sarah and I got tickets for the dress exhibit and the self-guided tour. Turns out the self-guided tour means they scribble a few arrows on a map and set you loose in the stern of the ship to wander. It's only because there were a few strangely placed exits signs that we found our way out of the engine room. At times it reminded me of a carnival fun house, with sheets hanging between different displays. 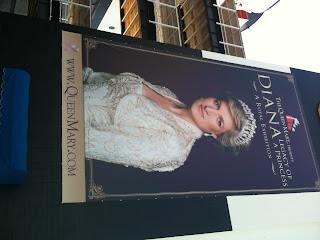 We knew we were in the right place when we saw the four-story tall Princess Diana. 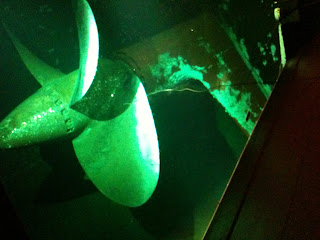 One of the ship's propellers. For some reason, this freaked me out. You walk through a hole in the hull and look down into a specially constructed and lit tank. The whole thing gave me the willies. 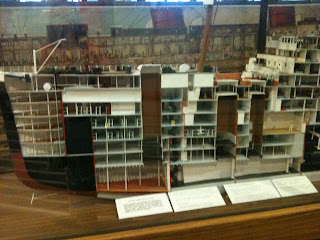 A cut open scale model of the Titanic. Probably not the most auspicious or cheerful way to start the tour. If it had been up to me, I would have added little icebergs and lifeboats, and a blue Leonardo DiCaprio. 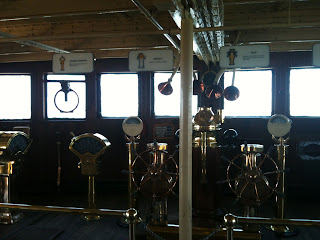 Seeing the bridge was kind of cool. However, the ship's horn blew to signal noon just as we walked in. Sarah and I both jumped about two feet.

After we wandered the ship, we headed to the Princess Diana exhibit, which wasn't exactly as advertised. The bulk of the displays were pictures, commemorative tea towels, tea cups, and framed newspaper articles. It looked like they raided the Franklin Mint and someone's grannie's china chest for the items.

Throughout, there were big signs with information on the various members of the royal family, and they could not have been more fawning in their praise. The members of the royal family were all solely dedicated to their loyal subjects and their country and always acted in the interest of their people. Even the section about Princess Diana's disaster of a marriage was given a good spin - it was true love at first, at least for Diana. She desperately wanted to make the fairy tale work.

Cameras were forbidden in the exhibit, so I had to be content with pretending to text while sneaking pictures. I'm such a rebel. 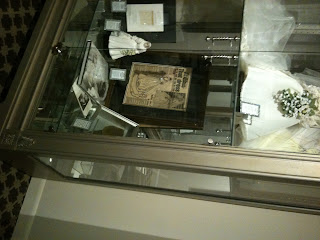 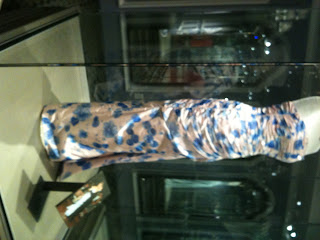 The bottom half of a dress. 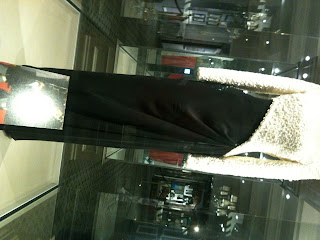 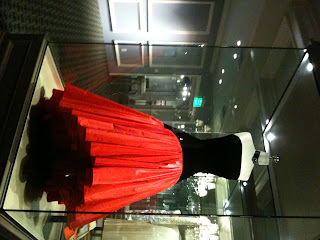 Sadly, I had a dress like this in high school. I thought it was the height of fashion. 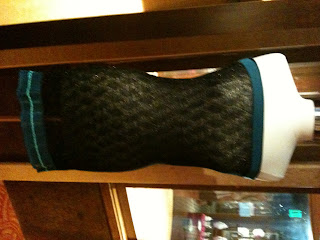 A replica of the famous see-through dress that that shameless hussy Kate Middleton wore to snare Prince William, only $250. I offered to pick up one for a high school friend, but she declined. I can't imagine why.

Sarah was most looking forward to seeing the Spencer Tiara and the Lover's Knot Tiara, which were listed as being on exhibit. She was very disappointed. Instead of real royal jewels, we saw poor copies sitting under a plexiglass case on a tacky dressing table. Sarah pulled up pictures of the real items on her phone to compare, and the ones on display weren't even close. The tiaras for sale in the gift shop looked more authentic.

Also on display was the back-up wedding dress for Sarah, the Duchess of York. It looked like a cheap prom dress and was all yellowed. There were also a few dresses on loan from Kate, the Duchess of Cambridge, which was kind of odd. Included in the dresses was the original see-through dress, complete with a picture of Kate wearing it and a glamour shot of the dress's American Ambassador. The dress has an ambassador. I just can't even.

Sarah and I decided that the problem was that this was a collection of privately owned items, all purchased at auction after Diana's death. The exhibit was not professionally curated, and the clothes had not been stored correctly at all. Most looked a little faded and threadbare.  Sarah even asked if there was a curator on site, and the woman in the gift shop just shrugged.

On our way out we decided against buying a tiara or a replica of the sapphire engagement ring.

We also visited the ship's "Shopping Alley," where we could have bought any number of Queen Mary commemorative items, including t-shirts, key rings and shot glasses. There was a store that carried items  "from" Scotland, but many of the kilts on display had become faded and dusty. I'm guessing they don't sell a lot there.  But I could have bought a book about the ghosts of the Alamo. Cool. 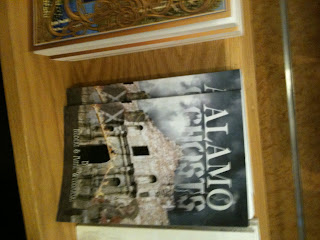 It was an adventure, and despite the whole thing not living up to expectations, Sarah and I had fun. It will become one of those shared, fond memories - "Remember that time. . ?" And Sarah now knows not to include it on the itinerary when Knittergran and Runnerdude visit next week.
Posted by hokgardner at 1:04 PM

Reminds me if the time we took a guided tour of a witch museum in Salem and when the guide asked at the end if there were any questions Jim said yeah can I have my money back?

Well, gosh. Now you've ruined it for me!
(no you haven't)

I understand the double edge of these kinds of excursions - the company was good even if the exhibit wasn't!