A few weeks ago I finally signed up for our new neighborhood's e-mail listserv. I figured it would be far less interesting than the one in our old neighborhood, which regularly included complaints about chickens, warnings about loose dogs, and conspiracy theories about helicopters buzzing the area at night (really). We're in the suburbs now, where everything is nice and "normal."

The first message I saw was about how someone had yelled at the nice high school boys who had started their own ice cream truck business, and couldn't we give the nice boys selling ice cream a pass on the whole "no soliciting" thing.

Fortunately, most people were joining in on the side of nice ice cream boys. The interesting e-mails were from people yelling at anyone who would dare tell kids they can't sell ice cream. It descended very quickly into telling people to go form their own town if they didn't like living here and suggesting that maybe we have armed guards at the entrance checking everyone's ID.

The moderator stepped in at this point and reminded everyone that personal attacks aren't allowed and that maybe people could reconsider their enthusiastic use of the "reply all" feature.

In response, several cranky people formed a rogue neighborhood listserv, where everyone would be free from rude interruptions from a rude monitor who was squelching free exchange of ideas.

The other big topic on the listserv is the condition of the many "ponds" in our area. They are supposed to be decorative and provide habitat for birds and such. They are a nice touch. However, right now, they are mostly empty, with just a bit of green slime at the bottom. The people whose houses back to the ponds are not pleased, to say the least. Nevermind that we haven't had rain in months and farmers are losing crops and herds because there's no water. The entitled suburbanites want their water features.

There's been lots of chatter on the listserv about who, exactly, is to blame. Is it the HOA? The builders? The water supply company? There's lots of finger pointing going on.

Finally, the HOA sent out an e-mail reassuring residents that they were aware of the problem with the ponds and were in the process of addressing it. Apparently their way of addressing it was to put up signs. 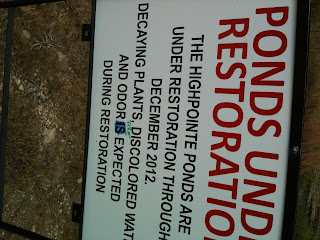 It's nice of them to warn us that "decaying plants, discolored water and odor IS expected."

Obviously this is a grammar error up with which I cannot put. So I pulled over and changed a few of the signs. While I was working on the first one, a woman stopped to see what I was up to, laughed and drove away. Phew.

I doctored the second sign when I had Ella with me, and she was MORTIFIED. "Mom! You are vandalizing. You could get arrested. You need to wipe it off."

She then told on me to the neighbor, who looked at her son and said, "See! I'm not the only mom who corrects grammar."

I was pleased to see that my edits were still there this morning. They may be small and hard to see, but I feel better knowing that the signs now have subject-verb agreement.

Snicker. I wonder if you can get a discount on your vandalism fine if you correct the grammar on your ticket?

Apparently you need a bigger and darker Sharpie - I'll send you one!

Actually, funny thing, I used the word "laid" recently in a blog post and thought of you. That sounds funny, but what I was wondering if I was using it properly and should I have said 'lain' or 'lied' and I just KNEW that you would know.