At least it was a dry heat

Last Friday morning, I flew out at o'dark early, headed for Los Angeles. One of the things I was most looking forward to, aside from seeing my sister, seeing our aunt and uncle, having breakfast with Lisa Rosenberg (who is absolutely lovely), and going to Disney Land, was escaping the heat. We've hit the point of the summer when I become hostile about the heat and take it personally. It's hot out just to make me miserable. I've lived here 18 years, and I've never adjusted to the heat, and I moved here from Florida.

Unfortunately, I chose the weekend that LA was having its worst heat wave of the summer to visit. Everyone who found out I was from out of town, apologized for the heat. "It's NEVER this hot," they'd say. In Texas, when a visitor complains about the heat, we usually say, "This? This is nothing. You should have been here last year. Last year was worse."

So it was hot, but it wasn't as hot as Austin, in that we could actually be outside without bursting into flames.

And that is the only complaint I have about my trip.

It was just the right amount of doing cool stuff and sitting around and watching trash TV. Knittergran still can't believe we didn't go to the beach or to the Getty, but I'm saving those for the next trip.

Our one culturally significant trip was to the Griffith Observatory, which sits high in the hills above LA. The view was pretty spectacular. 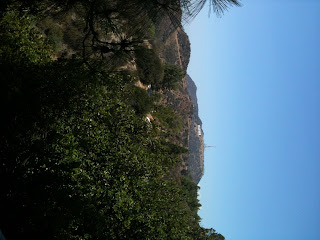 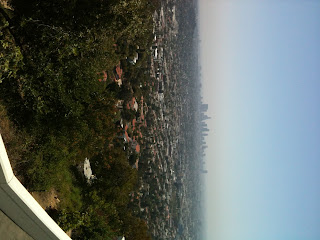 The Griffith Observatory itself is pretty neat. We wandered around inside for a while and then poked around the the grounds. 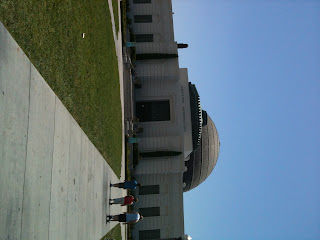 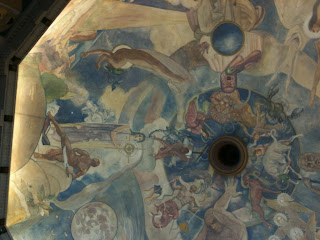 Some big allegorical mural on the ceiling 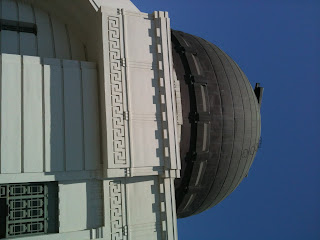 The dome that houses the 12 inch Zeiss telescope

Once we stopped playing tourist, Sarah and I went to the movie studio where her boyfriend works. I'm not sure I'm allowed to say which studio and which show or whether we were even allowed to be there.
The show he works on was taping, and we got to sit in the VIP area and watch the action on the monitors. Turns out watching a TV show be taped is very boring. And the craft services table looks like a church potluck.

We bailed out of the taping after an hour, and wandered around the backlot. I was stunned at how deserted it was. We could have wandered anywhere without a problem. But we didn't. 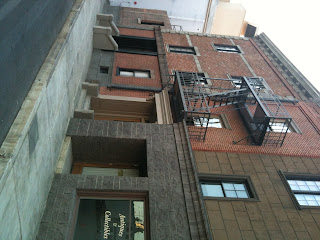 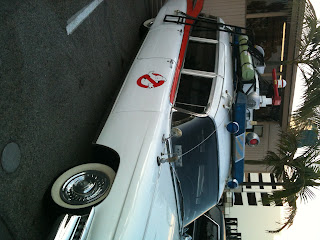 We got to the studio just as a taping of Wheel of Fortune was letting out, and we had to walk the wrong way through the herds of fans leaving. Many members of the audience were morbidly obese and on hoverround scooters, which somehow seemed appropriate.

As we were walking, a very well-preserved blond lady waved at us cheerfully from her car. Turns out it was Vannah White. My first celebrity sighting!

I had a celebrity sighting in the wild the next day at the grocery store. Sarah nudged me and said, sotto voce, "It's Jim Parsons." I turned and saw DR SHELDON COOPER standing next to me. It took all the self control I had to just play it cool and not go all screaming fangirl on him. But he was there doing his Saturday shopping, and no one else was bugging him, so I didn't take a picture or ask for an autograph. Ella is very disappointed in me.

I got home at 2:00 am Tuesday to a spotless house, folded laundry and sleeping children. I think I should go away more often. But I'm still having trouble adjusting to real life, where there aren't celebrities at the grocery store and craft services tables with lots of baked goods. Sigh.
Posted by hokgardner at 11:21 AM

I was so happy to meet you and the delightful Sarah! I have always dreamed of having my own craft services table in the living room... Red Vines for breakfast!

was he dressed as the Doppler Effect?