Growing up in Florida, I went to Disney World a lot.

(Excuse me, I mean "The Magic Kingdom at Walt Disney World." I briefly dated a guy who worked there and he insisted on using the full name each and every time. Part of the reason I only dated him briefly.)

We'd leave home at 6:00 am and be at TMKWDW by the time the gates opened. After a full day, we'd watch the fireworks as we rode the paddle steamer across the Lagoon to parking lots. It was easy. Now, apparently, to go the TMKWDW, you have spend a whole week there, staying in the resorts and eating meals with characters and spending all day, every day at one of the parks.

Even though I've been to TMKWDW dozens of times, it's been at least 20 years since my last visit. But what I remember is that the place was huge and spread out and it really was its very own world. The outside didn't intrude at all. I also remember it as spotlessly clean with pairs of garbage people following visitors around sweeping up. And cast members were always in perfectly fitted, pressed uniforms, despite the wilting Florida heat and humidity.

When I planned my trip to LA to visit my sister, one of my requests was that we go to Disney Land. I'd never been to the original Happiest Place on Earth and figured it would be fun to go without kids. Fortunately Sarah and her BF are good sports and humored my request.

I decided to just throw myself into the spirit of being at Disney Land. No matter how bad the crowds or how long the lines, I would have fun, mostly because I wasn't dragging four hot, tired, whiny kids along with me. And it worked. I had a great day. While it was hot, the crowds weren't bad and the lines weren't too long.

But I was shocked at how different Disney Land is from TMKWDW. It's so small; the castle doesn't dominate the skyline like it does in Orlando. I actually asked my sister where the castle was when we arrived. It just sort of blended in. 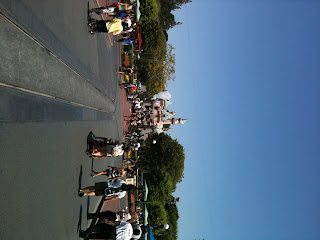 There it is, in the distance.

Everything seemed so packed together. The entrance to Pirates of the Caribbean was right next to the Haunted Mansion, which was right across from Splash Mountain. The sidewalks were narrower, and there weren't the large plazas I remember. Everything also seemed just a little shabby and run down. I saw cast members in wrinkled, ill-fitting costumes; there was trash here and there, even on the sides of the roller coasters; and the condition of It's a Small World would probably make Uncle Walt cry. 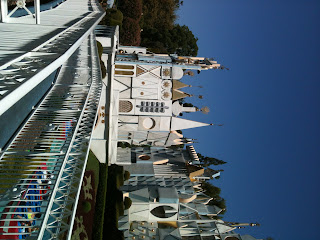 The stucco on the outside was peeling and stained and dated looking. Disney at some point decided to add characters from their movies to the collection of dolls - Woody, Buzz, Alice, Peter Pan, and Ariel all make an appearance - but they seem to be just randomly inserted wherever there was space. And they don't match the other creepy dolls in style at all. A lot of the original dolls were broken down. The creepiest were the dolls with one eye stuck either open or shut. Shudder. Adding insult to injury, the ride jammed just before our boat got to the landing. We were stuck in the bright sun, listening to that damn song over and over again. I think Sarah's BF may have said something along the lines of, "I told you so."

The highlight of the day was Splash Mountain. Somehow, despite there being one at TMKWDW, I'd never been on the ride. It was the only long line of the day, mostly because it was so damn hot that everyone was looking to get wet. It was so much fun, and we got soaked to the skin. 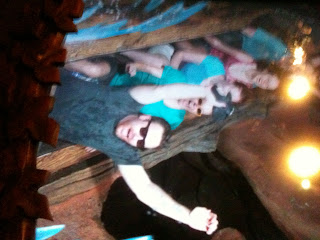 I cheated and took a picture of the photo they wanted to sell us. I'm the second person.

We left just as we started to get punchy. All around us were parents with kids absolutely melting down, which made me even happier my kids weren't there. I'll take them next time.

Knittergran still can't believe that Sarah and I went to Disney instead of someplace like the Getty. But it was very much the day I needed.
Posted by hokgardner at 2:55 PM

Last year I was also corrected that it's not Disney, it's Magic Kingdom. Disney World is all of the parks. Whatever. When you say Disney, people know.

I think it's great that you went but that report on Small World made me so sad. WTH, leave Mary Blair's design alone.

I have been to both and while I totally agree that the Orlando castle is amazing, TMKWDW seemed smaller to me. I grew up going to Disneyland and was expecting TMKWDW to be HUGE. I guess they mean Disney WORLD is huge.