Every once in a while, I get the urge to either get another tattoo or to do something radical to my hair. I always end up doing something to my hair, mostly because I can’t decided what or where I’d get for a tattoo.

Last summer I tried to turn my hair red and ended up with a purpley, magenta mess. In November, I lopped 10 inches off my hair and donated it to Locks of Love.  I am totally of the opinion that “it’s just hair, and it will grow back.” My husband, however, wishes I’d just let it grow long and leave it alone.

While Ella and I were at climbing nationals, I noticed that all the girls on one team had bright striped of color in their hair, and I decided I wanted to copy them. I asked two of the “big girls” on our team if, given that I’m a 41yo mother of four, I could rock a hot pink stripe. They both told me to rock on.

I dithered for weeks and then finally took the plunge. I’m not totally happy with how it looks, mostly because it’s kind of subtle. Next time, and there will be a next time, I’ll put the dye in closer to the front so that it’s more visible. The one downside is that the dye doesn’t seem to work on gray hair, so I have some noticeable streaks of white in the middle of the pink. The contrast doesn’t show up well in the picture, but in person, it’s more visible. 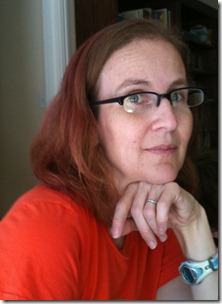 Ignore the fact that I’m not wearing make-up and that I’m running on about four hours of sleep.

Once this stripe fades or grows out, I’ll be experimenting again. Perhaps next time with purple.

Oh interesting.. I don't think I knew that you have tattoos. Plural.

And I totally like the pink. (and also the idea of purple) My hair stylist tried to put a turquoise feather in my hair last time and I balked. Maybe next time.

it actually works better if you bleach the hair first with peroxide (or highlighting stuff out of a box) then do the color.

wait until you come to visit. i'll do it for you and it will look great. i'll bleach it a little first so it will really take, and i'll partition off the section of hair so it will be a really good, defined streak.

Oh! I want to see it after Keeffer does it too.

I think you look wonderful.

It's good to see you, my friend.

You should color the rest of your hair darker so the pink stands out more.
I'm, again, so like you. I'm thinking of getting a nose piercing (just a tiny thing) before my 40th birthday.

Love the pink though!!