Sleeping is for suckers

While we were in Atlanta, Elizabeth decided that she wanted to be an all-night party person. Most nights, I was lucky if I got her to fall asleep by 11:00. Part of the problem is that she discovered, on our first night there, that she could climb out of the pack’n’play crib. She appeared in the upstairs hall, looking quite pleased with herself, about 15 minutes after I put her in bed.

Some nights, I’d start her out in my bed, but she’d wander around, and I’d have to put her back in bed repeatedly. Other nights I tried putting her in one of her sisters’ beds or on Campbell’s blow-up mattress, thinking it would be a treat for her to sleep in them. She thought it was great each time I put her in bed, but she quickly popped out and wandered around.

I took to sitting on the floor in the upstairs hall, outside of whatever room she was in, and keeping a stern eye on Elizabeth, which she did not appreciate.

Most nights I ended up with her in my bed, which was not a good solution for me, so I moved her into her little crib once she fell asleep. It was a long three weeks, and I dreaded bedtime each night.

Some nights Elizabeth gave me a break and wore herself out so much that she fell asleep in my lap or as soon as her head hit the pillow. But those nights were few and far between.

Now that we’re at our neighbors’ house, I’m trying to get Elizabeth back into a good sleep routine. They have a son who’s about a year older than Elizabeth, and he has an adorable little toddler bed in his room, which is where Elizabeth is sleeping. I had hoped that she’d be so thrilled to be in her friend’s little bed that she’d stay put. Ha.

B and I have been taking turns putting her back in bed and closing her door, while ignoring her insulted screams. Each night gets a little easier.

Last night we let her have some books in bed while she fell asleep. 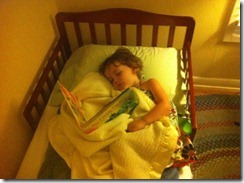 That’s my girl! Asleep with a book open on top of her. I checked on her again before I went to bed, and cracked up. Even though the little bed has rails on the sides, Elizabeth still managed to wriggle out of it. 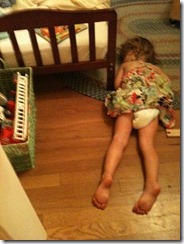 At least she doesn’t have far to fall. I can’t believe she didn’t wake herself up doing it. I popped her back in bed, and then placed a chair backwards next to the gap in the railing. I was going to buy her a little bed like this for the new house, whenever we manage to move, but I think I may go for a big bed with a cage over it.

Posted by hokgardner at 6:21 PM

Oh my goodness this brings back memories. My dauthter was the same way. Now that she's 12, getting her out of the bed as opposed to keeping her in it is the challenge.

I wanted a caged bed for my youngest. On vacation when she was 3 we shared a bed (hubby was not there) and after that it took months to get her to sleep alone again.

I have a large wire cage I can;t keep my escape-artist dog in...I should ship it to you...

Oh those dreaded sleep transitions. I still have nightmares of my son treading into our bedroom, night after night, and me walking him back to his room, night after night until finally my husband decided to use my son's stuck bedroom door to our advantage. My son cried a lot that first night he couldn't get out but he finally was cured of those night time roams. Not sure it was the most humane but it did keep this mom from entering into a homicidal rage. So in the end we made the right decision. Right?