Last week, just when the Bicker Twins were getting on my very last nerve, I saw a post on FaceBook that the knitting store near our house still had slots in Wednesday afternoon’s class for kids. The girls gave me an enthusiastic thumb’s up about going, so I called and signed them up.

On Wednesday, I happily delivered them to the store, leaving the girls with warnings of dire consequences if they bickered with each other during the class.

Now, both girls can knit; Knittergran taught them. But they’ve never made anything beyond lumpy bits of stuff – their attention span hasn’t been good enough for them to actually finish anything. Given this, I was interested to see how the class would go.

I couldn’t have been more thrilled. The instructor taught them both the proper way to hold the yarn (not like I hold it) and how to purl. Then she got them started on a simple project – fingerless gloves. The pattern was dead simple – four rows of garter, stockinette for a few inches, four more rows of garter, then cast off and stitch up the seam, leaving a hole for the thumb.

When we got home from class, both girls immediately sat down and began knitting. Ella finished her first glove after dinner and immediately cast on a second. I went to bed early, and when I did, both girls were still on the sofa knitting away.

Each has now completed a pair of gloves and has started on another pair. Lily will go back to knitting class this Wednesday while Ella is at newspaper camp. But it will be good for Lily to spend some time away from her bossy big sister. 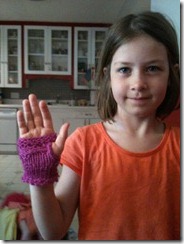 Lily with her first finished glove. It fit perfectly. 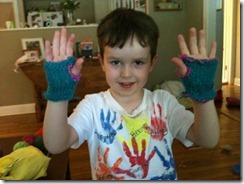 Campbell wearing the “Super Hero gloves” Ella made for him. Notice the contrast stitching around the edges.

I am thrilled that the girls seem to love knitting. B’s not so sure about it, though. He’s worried about ending up buried under yarn and knitting bags.

What a dream! Sounds fabulous!

And I love that you called them the Bicker Twins. I'm going to steal that name for my own kids.

Ah well you know the Devil makes light work of idle hands so just as well they're twiddling their thumbs productively. I could have done with some gloves last Saturday night!

They are already better than me! Bravo kiddos!