Yesterday afternoon I took Campbell for his fourth trip to the Emergency room. First there was the gash on his forehead. Then there was the pill-swallowing experiment. And who can forget the great Penis Incident? And then there were the injuries that were bad, but not bad enough to warrant a trip to the hospital, like the time he almost bit his tongue in half (our pediatrician handled that one) and the gash B superglued shut while on a recent camping trip.

This time, his ER trip was for a huge gash on his chin. He was running around the living room and slipped and fell, hitting his chin on the corner of the coffee table. Of course, he did it while we were getting ready to walk out the door to take Knittergran to the airport. I convinced B that superglue was not going to work this time and loaded Campbell into the car. B ended up doing the airport run with Knittergran, who was a bit worried about leaving amidst such chaos.

Unlike previous injuries, this one required stitches, which I think makes Campbell a REAL boy now. It’s like a badge of honor and true boyhood.

I was really impressed with the Dell Children’s Medical Center ER, once we got through the interminable wait to be seen. We’ve had some not-so-good experiences there in the past, but this time the staff was wonderful. The nurse and doctor couldn’t have been more gentle or patient with Campbell. They didn’t start working on his chin until they were sure he wasn’t going to feel any pain. I was holding Campbell’s hands while the doctor worked, and he didn’t flinch a single time. I’m not sure I could have been as still.

Poor Campbell was so funny after the meds – fentanyl and versed – kicked in. I had to laugh at him staggering around, insisting he could walk. Then he’d tip over (don’t worry, I caught him before he actually fell), say he was dizzy, and then ask me to carry him. When we got home, the big girls took their job of keeping him still on the sofa very seriously – including sitting on him when he tried to get up.

I decided to keep Campbell home from preschool this morning, worried that he’d crash around and pop the stitches open. Additionally, I wasn’t sure how he’d feel after his narcotics cocktail last night or whether his stitches would bother him. Now, I’m regretting that decision. He’s tearing around the house and annoying his little sister, just like normal. 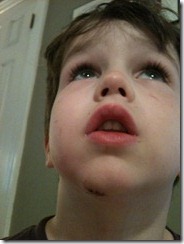 Badge of honor, dude! When he grows up, he can say he got it in a knife fight. Glad it wasn't worse - Little Man took 4 just below his left eyebrow in the ice this past winter. A very rakish looking scar.

My daughter got stitches in the same spot but she was 22 at the time!

Oh, and I read the penis story - my son ened up having a circumcision at age 10 because of those issues. Some boys just end up needing it per the urologist we saw - it does not have to do with cleanliness...

There's a You Tube video somewhere of a kid about his age babbling after having some sedative meds, hilarious. Poor mite, at least it's in a rather unobtrusive spot.

Boys are so weird! My teenager, the day before he started high school, sliced open his elbow taking out the trash. He believes in the "Santa" method for trash removal, which is not the best way when taking out broken glass. I told him to tell a different story in each class, and everyone would be talking about him by the end of the day. Alligator fight, etc. Trash and coffee tables are way too boring.

It's a shocker how much a hit on the chin BLEEDS.

Our Baby E went down a slid backwards and landed on his chin...gash...didn't look TOO BAD..at first...but, then, oh, man, then the blood started and it was agushin'.

Yeah, a couple of butterfly stitches.

Just think how cool and boyish he will look if it scars!