We saw the president–kind of

President Obama was in town yesterday to give a speech at the ACL theater downtown and to attend a dinner out in Westlake. I knew traffic was going to be bad as a result, so I carefully planned my route to take Ella to climbing practice in the hopes that I’d avoid the worst of it.

At first, I thought I’d succeeded. I blew down MoPac in record time, confident we’d actually be on time. But when I turned on to 290 east, otherwise known as Ben White Blvd., traffic came to a dead stop at S. First. 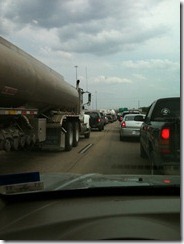 cars as far as the eye can see

At first it didn’t occur to me that this jam was related to the president’s visit – all the news stations had advised drivers to stay away from downtown and I35, which I had done. After sitting for 15 minutes, with Ella quietly freaking out about being late and the little three whining about being tired of sitting still, I turned on one of the AM talk radio stations just in time to hear that the president’s plane had landed a few minutes earlier and that the motorcade was underway.

Obviously, Ben White had been shut down in both directions to let the motorcade through at some point. So I tried to get off Ben White, but all the access roads were at a standstill, too. We were stuck.

As soon as the talk turned to people calling in to bitch about being trapped in traffic with gas prices being too high, I turned back to music. Then I practiced deep, calming yoga breaths while the kids whined and cried and wiggled. And I posted something on Twitter about how I supported the president but didn’t think landing at 5:00 was cool.

Finally traffic got moving again, and we were a mere 30 minutes late to practice. Ella started to panic, but when she saw three other teammates arriving at the same time, she calmed down.

On the way home from practice, I tempted the fates by getting on I35 north. I figured there was no way I could get stuck again. Ha. Just south of the river, I realized that southbound I35 had no cars on it other than police cruisers. Then all the cars on our side slowed to a crawl.

But – this time there was at least a reward for being stuck. 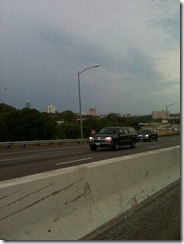 That’s the president’s Suburban. The big girls were beyond thrilled that we got to see the motorcade, and I have to admit, I thought it was pretty cool, too. It’s quite a procession they have going – lots of big SUVs with radio antennas all over them, passenger vans with the press pool, police motorcycles and cars, ambulances, etc.

Fortunately, once the motorcade passed, cars on our side started moving again, and that was the end of our traffic woes for the day.

But the next time the president comes to town, I’m staying home.

Posted by hokgardner at 8:29 AM

The man does create a lot of chaos around him but yeah, it's totally worth it.

One of the good things about living around here is that we don't do all that pomp and circumstance anymore - our motorcades tend to go quickly. Your experience was probably due more to it being rare than anything. Glad you enjoyed your sighting.

I used to
live in DC and I'd see that sigh about once a week or so. it never loses its thrill

It does cause a huge disruption. I remember when George Bush came to Sydney, half the city was in lockdown, very inconvenient.

Stupid presidents, thinking they're all important or something. (Very cool.)