I have been knitting up a storm during the past few weeks. It’s been a good way to burn up all the nervous energy I have as a result of the prednisone (which I’m almost finished with, thank the baby jeebus), and it keeps me from pacing the floor or fidgeting.

During my first counseling appointment last week, my therapist asked if I meditated, and I laughed out loud. Even when I’m not whacked out on steroids, I’m pretty tightly wound, and my mind whirrs constantly. My efforts at meditation have been absolute failures. She did point out that knitting might be my form of meditation, and I think there’s something to that. When I sit and knit, I can focus on the yarn and the click of the needles and rhythm of my fingers moving. Knitting also forces me to sit still for longer than I would otherwise, because I can’t hop up to do whatever pops into my head without potentially losing stitches or messing up a pattern. Instead, I’ll tell myself that I’ll get up and do whatever when I finish that row or pattern repeat. The next thing I know, it’s been ten minutes and I’m still sitting down.

I haven’t been knitting anything very complicated lately – just hats, scarves and shawls. I’d love to work on socks, but my hands shake too badly to work with tiny needles and thin yarn. I’m running out of friends and neighbors to pawn them off on when I finish. I’m pretty sure that the next time one of them sees me coming up the walk with a pile of something fluffy, they are going to lock the door and pull the curtains.

This is what I have finished in the past eight days. 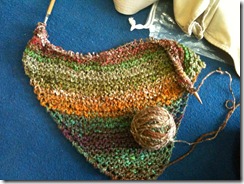 Ella and I stopped in at Yarnorama in Paige, TX, which is a tiny town between here and Houston on our way to her competition last weekend.  I bought some gorgeous Noro yarn called Kogarashi that was just divine to work with.  I managed to finish a whole shawl while at the comp, but when I got home, I decided I didn’t like how it looked. So I ripped the whole thing back and started from scratch. 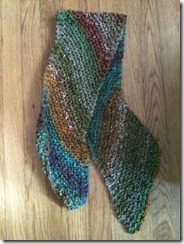 I like the yarn as a scarf much, much better. This was the first time I’ve knit on the diagonal, and I like the way it worked with the striping and colors. 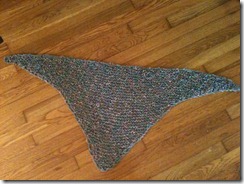 Next up, I knit a shawl – the same pattern as I did with the Noro yarn – out of some Ironstone Felicia. This yarn works better as a shawl. It’s hard to see in the picture, but it’s almost lacey. It’s not as big as I would like, but it’s still a pretty little wrap. I do need to block it, though. 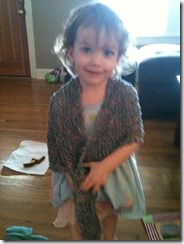 Elizabeth approves of the shawl. She pronounced it “toot.” I had to take it away from her before she coated it in slime. 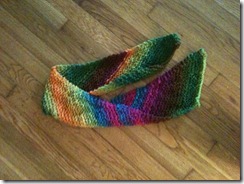 After the shawl, I knit another diagonal scarf out of a skein and a half of Noro Kureyon that I had in my stash box. One of the skeins had three knots in it, which is a common complain about Noro, so the color changes rather abruptly in a few places.

I stopped at a local yarn store on Saturday and bought some Noro Furisode and have already cast on another scarf.

At least all I’m channeling my fidgety-ness into something productive and sitting still at the same time. Maybe I’ll even manage to get all of my knitting for next Christmas done by March.

I need to do more knitting--have nothing to show for my mental whirring these days. If you're just desperate to knit something and give it away, you could knit Elizabeth a baby sweater and then give it to you a year or so ago, from me.

it IS toot! So is your little Bit! and yes, knitting can be meditative so make time for it each day.

That is a fabulous idea, and your baby looks wonderful in it.

I love the shawl on Elizabeth, it's just her size. I haven't been knitting enough, and when I do, it's not been as restful as it should be. Not sure why. I cranked out a couple of hats pretty fast for a friend in chemo and now I've hit a wall.

I'm all about pushing the meditation. I'm just not all about following my own advice. Those of us who don't do well at it probably need it more than those annoying quiet-mind people.

My most successful meditation that I'm most consistent at is contemplating nature. Trees. Birds. But your meditation has mine beat - yours produces clothes!

Hey, knitting IS your meditation. And it's quite lovely I might add.