Earlier this week, at the beginning of my solo parenting gig, I told the big girls that if they were helpful and extra good this week, I’d get them pet hermit crabs. We all mostly survived the week, and the girls were mostly good, so we trekked to the pet store yesterday and picked out our new family members.

Quigley – he is Ella’s crab. She looks unhappy in the picture because she was convinced he was going to pinch her. 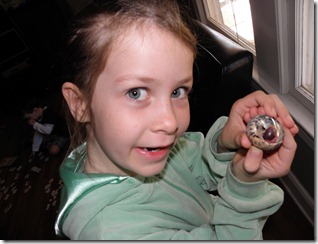 And Fred – Lily’s crab. Lily, my animal lover, desperately wants to hug him, and squeeze him and call him George, but Fred isn’t cooperating. I have to stop her from opening the tank and poking Fred 20 times an hour.

Turns out hermit crabs don’t do much, at least not during the day. The sand in their tank was covered in tracks this morning, so they apparently explored every nook and cranny during the night.

My idea, which wasn’t a brilliant one as it turns out, was that the kids would SHARE the hermit crabs. But since Ella and Lily have each claimed and named a crab, Campbell wants one, too. So I’ll be going back to the pet store for the 4th time – if I include the 2 trips it took to get the hermit crabs for Campbell’s class, which I do – in seven days. I don’t think I went to the pet store four times in the entire 13 years we had a dog.

My next goal is to find a permanent place in the house for Quigley and Fred. Right now they’re in the living room on a table, entirely too close to Elizabeth’s little hands for my comfort. Each time one of the big kids climbs on the arm of the sofa to check on the crabs, she’s right there behind them. I’m afraid I’m going to walk in the living room and find Elizabeth with a crab in her mouth.

B’s suggestion was that now that we can’t hold getting crabs out as a bribe, we can threaten to have a crab boil if the girls don’t behave. I knew I married him for a reason.

Every time they act up just get the butter out of the fridge!

Can't you have crab races or something?
And Lily is meant to be a spokesmodel!

You're the coolest mom ever.

Yes I do believe Lily has a future on The Price is Right.