It’s too dangerous out in the real world.

First, I set my hair on fire. And then I spent four hours in a lock down. Then yesterday, Elizabeth and I were nearly hit by an out-of-control, speeding car.

B and the big three were still camping, and the weather was perfect, so Elizabeth and I took a leisurely stroll around the block. We stopped to smell flowers and point at squirrels and kick the ball we brought with us. As we turned the last corner before our street, I heard a car coming along way too fast. I turned in time to see the car swerve back and forth and then jump the curb about 10 feet in front of us. The car plowed through several small trees and then travelled another 30 feet or so before being brought to an abrupt stop by a metal bus bench.

I snatched Elizabeth up and pulled out my phone to call 911. While I was on the phone with the operator, several people stopped to check on the driver. My across-the-street neighbor came out and took Elizabeth from me so that I could tell the driver that the paramedics were on the way. I was amazed at how quickly the emergency folks responded. Police, fire and EMS were on the scene within moments of my hanging up with 911.

After I gave a witness statement to the police officer, I went to my neighbor’s house to retrieve Elizabeth, and that’s when I really started to freak out. I couldn’t stop thinking about the what ifs of the situation. What if we hadn’t stopped to smell some flowers? What if we hadn’t been kicking the little ball along? What if Elizabeth hadn’t decided she needed to sit down on the sidewalk? If we had been 10 or 15 seconds faster with our walk, we would have been smack in the block-long path of destruction this woman left in her wake.

Odds are, the woman was speeding down the road, talking or her phone, or texting, or putting on make up – everything except watching where she was going. I’ve resolved not to talk on the phone ever again while driving. From now on, my phone is staying in my purse while I’m driving.

And I am never leaving the house again. I’m a recluse by nature anyway. 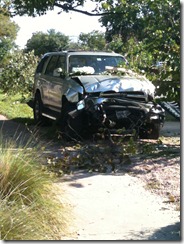 The car in its final resting place. This is the second time our neighbors have had a reckless driver end up in their yard. 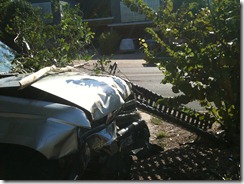 The bench had been bolted into the side walk. The car pushed it a good two feet and mangled it beyond repair. Even though the driver had hopped the curb half a block back, she was still going really fast when she hit the bench. 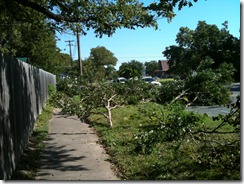 The path of destruction. All the trees got sheared off at ground level.

Posted by hokgardner at 8:04 AM

That is so scary. I have found that its best to put my purse somewhere I can't reach it inm the car. That way, im not even tempted to look at my phone.

Wow. Just - wow. So glad you guys are okay and took the time to smell the roses. Scary.

You need to become a hermit. What was the lady's story? Did you ever hear?

I agree with Wendi! and I TOLD YOU! Your blog is giving me PTSD!

What is that lady's story?

Wow! That's scary. No, beyond scary. Too many what-if's!

NJ has a hands-free law, and my car has a bluetooth connection, but there are still times I'm driving and I suddenly realize I'm not REALLY paying attention. And I still see TONS of people holding a cell phone to their ear.

I'm so glad that your little one slowed you down. Glad that you're both okay. Please share follow up on how much jail time that *it** is going to serve. Or community service. Or damages! Or all of the above.

So glad y'all are ok! Also, I will pitch in for a treadmill so you can keep running during you hermit phase.

Wow! So scary. So glad that you and your daugher ar ok.

I got chills when I read this on twitter, and I have chills now.

Thank GOd you were moving so slowly.

I can't stand the scariness of it.

I would be thinking and crying nonstop about it.

I'm so glad nothing happened, but I'm still shook up over this.

I'm so glad nothing happened to you and Elizabeth.