I have a dreadful case of Second Sock Syndrome. For you non-knitters, SSS occurs when you finish one sock but just can't bring yourself to knit the second.
I cast on this pair of socks back in May. The socks are supposed to be a birthday present for a friend whose birthday was back in February. The wool is nice to work with, and it's fun to watch the color pattern reveal itself, yet I just can't bring myself to knit the socks. I've been knitting lots of other things - like these baby socks. 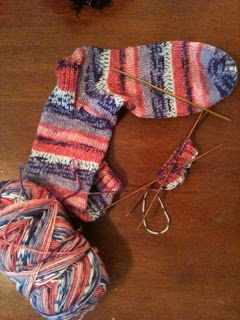 I finally finished the first sock last week, and I immediately cast on the second sock, hoping to be inspired.
No such luck.

Instead I started working on a baby hat from Spud & Chloe out of left over wool from the baby socks I've been knitting. 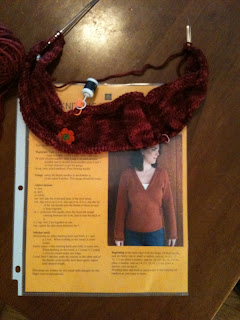 And in the ultimate act of SSS desperation, I cast on my first-ever sweater. It's a top-down, raglan sleeve wrap sweater that the Yarn Harlot raved about. I've had the pattern and the wool sitting on my desk for months, and I started it this weekend.
I even tried to force myself to knit the second sock by showing the first sock to my friend this weekend. Now that she knows about the socks, I feel a little more pressure to get the second finished already.
I know that if I would just force myself to work on the sock, I'd have it done in no time. If I had just worked on it instead of my other two projects, it would already be done. But knitting is supposed to be fun, not a chore. I don't want to force myself to knit.
But I do need to get this sock finished already.
Posted by hokgardner at 8:49 AM

I am a fellow sufferer (sp?). I also have "just finish it" syndrome, where you finish all the knitting - and then have to seam it/weave in the ends/block, etc. I finished a baby surprise sweater for my nephew a couple of weeks ago. 2 little seams! Not done yet.

Is there an early identification process to know who is at risk for SSS? Perhaps, if at risk behaviors are identified, then that person can be dissuaded from ever EVER attempting to take up knitting..

I'm pretty sure that if you start surfing the Internet you'll forget about SSS. I forget about stuff all the time from that.