Gorillas in the Rain

Once Ella finished with her climbing, we were able to have some fun in Atlanta. My mom and sister took Lily and Elizabeth to Babyland General, the home of Cabbage Patch Kids. They both said it was a very strange place. The big girls also got to go to the American Girl Doll store, and we all went to see "Despicable Me" - two big thumbs up, by the way.
We also dragged everyone - me, B, the four kids, my mom and dad, my aunt, my cousin and my cousin's two kids - to Zoo Atlanta for a day. The zoo is a really good one; it's small enough to visit in a few hours. It's also very well shaded, which is crucial in the summer in Atlanta. B is still on crutches for his broken foot, so we rented a motorized scooter for him. The kids all took turns catching a ride with him. Campbell loved steering. 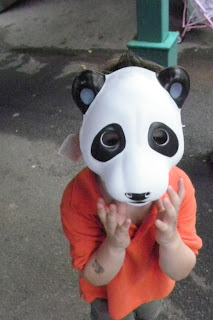 All of the kids suckered Gran into buying them treats. Campbell picked out this mask and wore it for the rest of the visit to the zoo. Every time we exclaimed that he had turned into a bear, he'd lift it up and say, "I not a bear! It's a mask," like we were idiots. 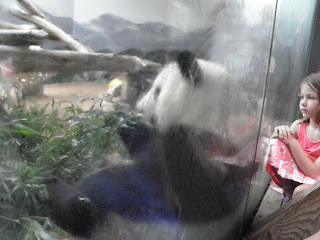 Lily has loved pandas since she was small. She and I spent hours watching the panda cam at the national zoo when Tai Shan was born. Zoo Atlanta has two adults and one baby, and you can get up close and personal with the bears. Lily could have spent the whole visit sitting right there. Unfortunately, the baby wasn't on display while we were there. But being this close to the adults was still really cool. 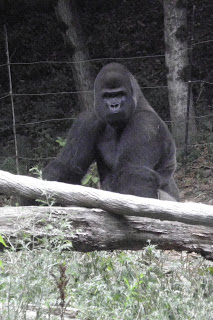 Zoo Atlanta is known for its gorilla habitat. They have three different areas with silver back gorillas on display. While we were by the exhibit, a thunderstorm rolled in and the skies opened. We hung out under a covered bench in front of the habitat with the juvenile gorillas and their mothers. It ended up being the best part of the day for me.
Before the rain started, the gorillas had just been lounging in the shade. But once it started pouring, the little gorillas went nuts, chasing each other around, playing tag, doing somersaults, and thumping their chests at each other. It was like watching a bunch of four-year-old boys play in the rain. Every once in a while, one of the mother gorillas would make a little one sit down for a few minutes, like he was being put in time out. I had put my camera away while it rained, so I didn't manage to get any pictures of the fun. But we had a great half hour watching them. 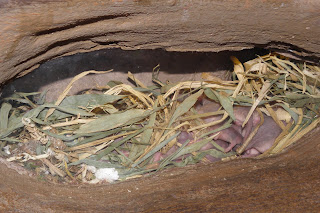 Baby naked mole rats in their habitat. The exhibit was really cool - all the dens had a glass side, so we could watch the adult naked mole rats scurry through their tunnels from den to den. The adults were really creepy looking. 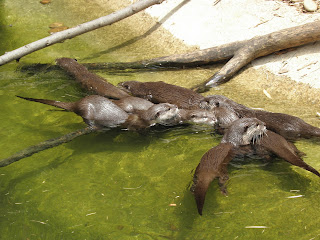 The river otters were a blast to watch. They were swimming back and forth and playing follow-the-leader. It must have been close to feeding time while were there, because they all kept lining up by the fence that led to the keeper's area. When we went back by a while later, they were all dozing in their various dens.
Speaking of river otters, have you seen this video of a mama otter teaching her baby to swim? It's squeeably adorable.
Posted by hokgardner at 11:58 AM

Looks like you had a great time....watch out for Campbell. I can see him asking for the car keys in the not too distant future.

Philly Zoo is our "local" favorite, and it has river otters as well. We LOVE watching them, and feeding time is a riot.

I love your description of the gorillas as "4 yr old boys". I can SO identify with that!

Fun. I love how you guys get around so much for climbing.

Wow great photos. Haven't been to a zoo in ages.

I've enjoyed watching the pandas at the San Diego Zoo and the gorillas at the San Francisco zoo. My daughter did her animal report at school on otters this year. I can't wait to share this video with her.

Love that shot of Lily looking so longingly at the pandas. I bet she would have climbed in if possible!