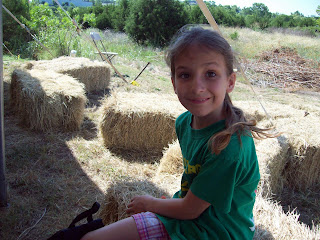 Ella went to the Texas/Louisiana Regional Climbing Championships this past weekend, which was held in the hot spot of Harker Heights, about an hour north of Austin. Prelims were on Saturday, and we had no expectation that she'd make finals on Sunday. After all, she was the youngest climber there, and this is her first year climbing on the team.

Turns out we shouldn't have underestimated her. The top 10 in each event advanced to finals; Ella placed 9th in sport climbing and 4th in speed climbing. Holy cow.

She and B had to get up before dawn to be back in Harker Heights in time for her to check in at the comp at 7:30. If we had known she'd qualify, we might have looked into having them spend the night at a hotel or something.

This competition served as the qualifiers for Nationals, which are in mid-July in Sandy, Utah. Again, we didn't have any expectation that Ella would qualify - she's only 8, and this is her first year climbing.

And again, we shouldn't have underestimated Ella. She got an invitation to Nationals in speed climbing. A second round of invites will be issued tomorrow, based on how many declined the first round, and she may get an invite for sport climbing.

In the meantime, we're figuring out how to get B and Ella to Utah in a few weeks. This trip wasn't exactly in our summer budget. B's current plan is to make a real trip of it with the two big girls. He'd like to drive out, camping in state and national parks along the way and stopping Sante Fe to visit his uncle. I'm rearranging summer camps and checking on plane cheap plane flights just in case B gets over this case of lunacy.

B and I are beyond proud of Ella. She handled the stress of the competition like a pro, and she was more excited about getting ribbons, free stickers, two climbing magazines, and a calendar with lots of girl climbers on it than she was about anything else. We're hoping she can hold on to that enthusiasm for as long as possible before she starts getting worked up about how many points she scores and whom she beats.

Right now she doesn't really get how big a deal making it to Nationals is. She's just thrilled she gets to go on a trip with Daddy and climb in another competition. And that's how we want it to stay. 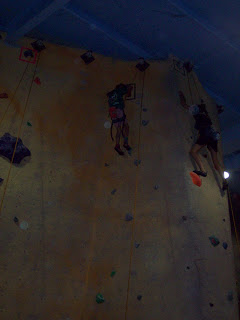 Here she is climbing on Saturday. She's the one in the green shirt. And to give some perspective - this was taken from a second floor balcony at the climbing center. The wall topped out at 40 feet.
*I learned this weekend that "climb on" is an official climbing term. When a climber hooks into the rope, she says to her partner, "belay on" to indicate that she's ready to start. The belayer then says, "climb on" to let the climber know he's ready.
Posted by hokgardner at 9:48 AM

That is awesome! Good for her! Glad she is enjoying it without being too competitive. It sounds like a lot of fun. Hope it all works out.

WOW! That is so awesome!

That is Great! I am so glad to hear that she has found something she likes doing and is good at it too. If she continues enjoying the climbing and ropes, she might be a counselor at those summer camps soon. Then next thing you know she will be doing this http://www.outwardbound.org/

Go Ella, go! Climb on. What a great post.

I am terrified of heights. I wish I were that fearless. Congrats to your daughter. Nice going girly. Us ladies in blogland are damn proud of you

Wow! You just never know! I can't wait to hear how it goes in Utah!

I never knew they had climbing competitions for the young crowd. Cool!

That's awesome! Kudos to you for keeping it low stress and fun. Nothing like accomplishment for empowering our daughters.