I was born without the gene that allows me to accessorize. There was a brief phase in the 80s (shudder) when I wore jewelry, but it didn’t last long with all the swimming and running and biking I did.

The other day I put on earrings, just for grins, and the kids all stared at me like I’d grown a second head. So I took them out.

On a daily basis, I wear my wedding bands, and that’s it.

My sister and mom have the accessory gene. They love jewelry and buy jewelry and actually wear the jewelry they buy. It’s just beyond me.

I had assumed that my kids wouldn’t have the accessory gene either, mostly because of the example I’ve set for them. Ella definitely takes after me, but Lily is a whole different story. She loves wearing jewelry and hats and scarves, which means she’s gone to school through the years in some interesting outfits.

When Lily turned eight, she starting asking to get her ears pierced. I said no, and she, between heartbreaking sobs, told me all her friends who were seven had their ears pierced. I easily came up with a list of about dozen eight-year-old friends who didn’t have earrings, and she pouted.

Over the past few years, she’s made a few campaigns to get her ears pierced, aided and abetted by her Aunt Keeffer, but I’ve always resisted.

I don’t know what got into me. Maybe it was because we bought a hedgehog or because Ella was actually arguing for Lily’s case rather than against, or maybe it was the combination of heat and sleep deprivation. Whatever it was, I finally caved.

I loaded everyone in the car and off we went. Campbell and Elizabeth were only concerned with whether they’d get to ride “epscalators.” Lily was wide-eyed and nervous. Ella was telling Lily how much it would hurt. 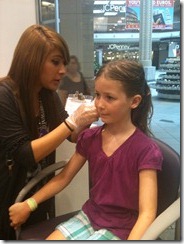 But she did it. She sat up very tall in the chair, with very big eyes, and she got her ears pierced. She didn’t cry even once. I can’t say the same for me. I don’t know why seeing Lily with earrings made me cry, but it did. My baby is growing up. 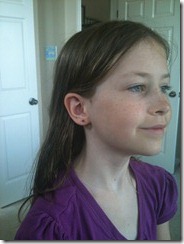 Lily is counting the days until she can take her starter earrings out, put new ones in, and accessorize. And now knittergran and Keeffer know what to buy her as presents.

Yeah, I don't have the accessory gene either. I think its more a matter of what my husband calls my energy algorithm. I figure I only have so much energy available to me each day. Every decision I make requires me to focus and use energy. So I decided that some things are just not worth me using up energy. What to wear is one thing I don't like to think about that is why I own the same tutleneck in 5 different colors. No decision required.No energy used. I know all my friends that do have the accessory gene think my approach is ridiculous, but their husbands think I rock. I am the only one ready when we are all going out to dinner. The others are still deciding what to wear :-)

In my family, we openly discuss The Jewelry Gene, but it's more about boys buying jewelry ... I guess it's just assumed the girls will wear it. My dad, who never thinks to buy jewelry, doesn't have the gene. My brother, who from a young age always wanted to buy our mom earrings, does.

Your little one looks so proud. I would have cried, too.

Please tell Lily not to do what my daughter did, just a few weeks ago (she is a teenager). She and her twin sister just got their ears pierced (because I'm such a hard ass mom I made them wait). One night she was trying to turn the stud earring, as directed, but she couldn't quite manage it. Asked her older brother to help. Instead of turning it he accidentally pushed the little globe into the pierced hole. And that's where Mom to the Rescue entered the scene. All I saw was my daughter's stricken face and her finger pointing to a swollen pierced ear hole. The earring was stuck inside her earlobe. With a deep breath I pushed that sucker back out from whence it came. Pain all around. and a little bit of blood. Fortunately she seems to have recovered but she is still freaked out and afraid to touch her earrings.

My oldest daughter still has intact ears at 24, my youngest started asking at about 6. We said wait until 16 - she wore us down at 12. Now she hardly ever wears earrings, though she is a major accesorizer, You just never know!

She does look lovely and brave!