For years, ever since the Zooman brought some to Zoo Day at preschool when the girls were little, I have wanted a hedgehog. The closest we came was hedgehog-sitting, a few years ago.

Since moving into the house and getting FeeBee the Wonder Dog, the kids have been begging for another pet. The other morning Lily tried to talk me into pet rabbits and then pet penguins. When I nixed both those ideas, she went straight to the one she knew she could win with – a hedgehog.

We badgered B to the point that he finally caved, provided he never has to touch it, feed it, walk it, clean it or acknowledge its existence.

After much research, off we went.

Turns out there is this great little pet store near our old house that I had never heard of. It’s called Zookeeper, and it’s tucked away in a shopping center that mostly houses furniture stores. The online reviews of the place were great – everyone raved about the animals and the staff and and and. They have a sloth in residence – A SLOTH!

So I loaded up the kids and off we went. Ella knew what we were up to, but I didn’t tell the little three until we got to the store. I almost changed my mind about the whole adventure when we saw the four-foot-long blue and black lizards in the front window. They gave me the creeps, but the kids were jumping up down, yelling “OhmygodlizardsIwantone!”

The store was tiny and crowded and filled with cages of snakes and lizards and spiders – all things that make my skin crawl. I nearly ran from the store, willing to abandon my children to their own fates, when I saw the huge aquarium filled with giant black scorpions. 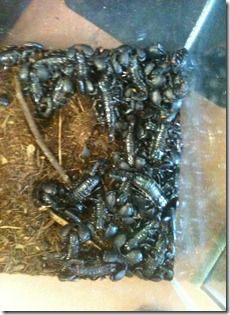 I just can’t. Who buys these things? They’re terrifying.

My fear was that we’d get all the way up to the store and be all kinds of excited, only for them not to have any. (Yes, I know there’s such a thing as calling ahead, but I have this weird phone phobia.) Fortunately, they had 8 baby hedgehogs, all curled up asleep. Ella picked out her favorite, and the staff member brought him out to meet us. 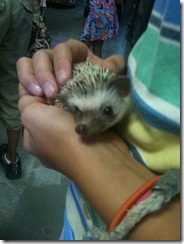 He didn’t go all spiky, and he snuggled right down in Ella’s arms. She hugged him and squeezed him and we named him wembley j hedgehog.

The staff member hooked us up with a barely used cage that someone had returned to the store and all the hedgehog gear we needed, including a can of mealworms (shudder). Really, if you ever want to go to a nice little pet store, go to Zookeeper.

We brought wembley home to be a “surprise” for B, who did actually know what we were up to. He took one look at wembley and asked, “What kind of pet sleeps all day and goes all spiky when you try hold him.” The girls just said, “Daayyyaaad, he’s so CUTE.” B has since admitted that wembley is pretty darn cute.

Poor wembley, though, is in danger of being loved to death. The girls want to have him out of his box all day, even though he prefers sleeping. 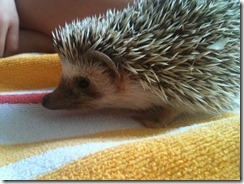 Last night the big girls were in heaven. Each got to sit with wembley asleep  in her lap for at least an hour. And ZOMG the cuteness was almost too much to deal with, especially when he rolled into a little ball. 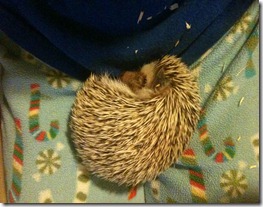 He eventually woke up and thrilled the kids by ambling around, climbing on them, and eating hedgehog chow. 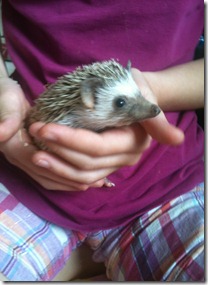 We’ve already had him out of the cage this morning. I think the girls are determined to turn him into a lap pet. Which is apparently possible. The petstore guy said that the more you handle them while they are babies, the less likely they are to be all pokey and spikey when they’re big. 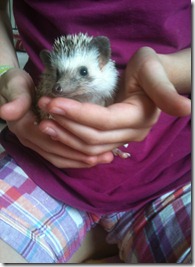 And now if you’ll excuse me, I want to go snuggle wembley.

I love Wembley. LOVE. HIM.

Love that pet store. Love them as pets. Just watch for signs of illness and get them treated quickly (knitting friend had a couple of problems with her incredibly cute hedgehogs). But keep having fun!

Wembley is a perfect name for a hedgehog. Very cute.

Maybe if I show this to my daughter she will get over her desire for a ferret. He is just sooo cute!