The kids and I are still camped out at my parents’ house in Atlanta, which, remarkably, is still standing, even if there are a frightening number of crushed goldfish crackers under the breakfast table.

Somehow, the other day, the topic of getting my big girls’ ears pierced came up, and I told Knittergran and my sister how Lily had tried to talk me into letting her get her ears done when she turned eight. Lily’s argument that “all the girls” in her class got their ears pierced didn’t sway me.

Last night, we all went out to dinner so that my sister, Keeffer in the comments, could have real barbecue, not the stuff they serve in Los Angeles. Because there are too many of us to fit in one car, we took two, and the big girls rode with Knittergran and Aunt Sarah to and from the restaurant. After dinner Knittergran and Aunt Sarah decided to head to the nearby mall for some shopping, and they took the big girls with them.

They got back about an hour after Runnerdude, Campbell, Elizabeth and I did, and when they arrived, we were all upstairs watching Rocky and Bullwinkle. Lily came into the room, looking slightly abashed. She sidled up to me with one ear exposed. And I saw this: 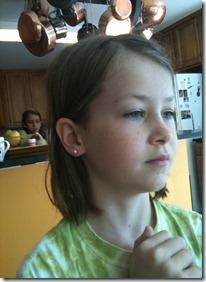 An earring! In my daughter’s ear!

I gasped out loud and put my hands over my mouth, while Lily stood there, looking terrified. I was just in shock. I couldn’t believe that my mother and sister would go against my wishes and get my 8-year-old daughter’s ears pierced without asking me first.

They all let me twist for a few minutes, trying to figure out how I was going to explain this to B and what I could possibly say to my mom and sister, before everyone started laughing. The earrings are held on with magnets, and Knittergran and Aunt Sarah bought Lily a whole pack of them.

I was so relieved that Lily didn’t actually have pierced ears. And Lily was so proud of herself for pulling off such a great prank – it was all she talked about for the rest of the evening. And, honestly, she did a frighteningly good job of looking like she was truly scared of what my reaction would be.

Once I recovered, I sent a picture of Lily with her earrings to B with a note that said, “I had nothing to do with this.” But Ella ruined the joke by telling him right away that they were magnets.

I hate to ask what the next prank will be.

Posted by hokgardner at 9:32 AM

So so hilarious! I would have loved to see you squirm. :)

I wanted pierced ears so bad, but my mom had a rule that it was either at 10 or 12 years old before it could happen. Then the summer I was 8 we were at my grandparents' with my cousin who was, I think, 6 at the time. My aunt said it was OK for Susie to get her ears pierced AND my grandma was getting her ears pierced so my mom relented and let me. It took place at a department store jewelry counter. And you know what? I've always regretted it. My ears constantly itched and I pulled on my earrings. I've always had stretched holes and have never, ever been able to wear wires or anything but studs. Maybe this still would have happened if I had been 10 or 12. (I'm curious to ask my mom about her version of these events, come to think of it.) Hold off as long as you can!

Hah! I have a friend who took her newborn baby girl on a visit to her inlaws. The inlaws kindly agreed to babysit for a few hours so she and her husband could go out together. When my friend returned, yup, baby girl had pierced ears. Talk about horrifying!!

My daughter used to use those magnet earrings to give herself all kinds of lip and ear and nose piercings. Funny how all the magnets just sort of got lost one day....

Still can't wait to hear the story of how you ended up with an extra week in Atlanta.

I would have died. Risky prank!