We have another day of 100+ degree weather, so I figured I’d cool things off with some pictures from my trip to Colorado last month. I’d be willing to sell a child to be back there right now.

Ella and I got to Boulder on Thursday, which meant we had two full days to play before her climbing competition on Saturday. It rained pretty much all of the first day, so we contented ourselves with brunch at Lucile’s and some meandering on the Pearl Street Mall before checking into what is quite possibly the worst hotel I’ve ever stayed in. If you ever go to Boulder, do NOT stay at the Rodeway near campus. 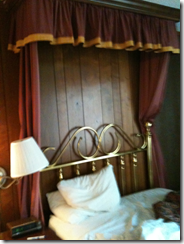 This was our lovely bedroom. The canopies were covered in dust. The carpet was icky – I didn’t let Ella walk barefoot in the room. It’s like the place is deliberately not doing any updating. The lobby looked like a bordello, and the “Cabaret” was apparently built OVER the old indoor pool.

Friday was gorgeous, so we escaped the hotel and headed up to Estes Park and Rocky Mountain National Park. The Trail Ridge road had just opened two days before, and there was still a lot of snow at the top. 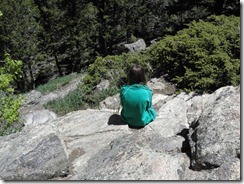 There were chipmunks hiding in the rocks. Ella was desperate to feed one, despite the signs that said doing so was against the rules. 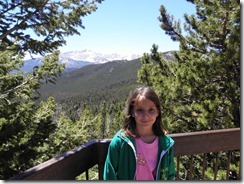 I kept making Ella get out of the car to look at scenery, which she declared was boring. 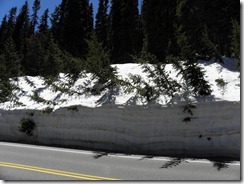 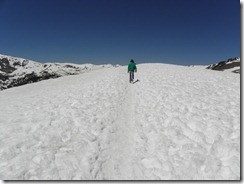 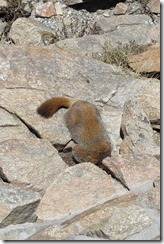 The back end of a marmot. He was too busy rooting around in the rocks to let me get a good picture of him. 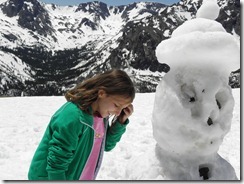 Some other tourists had built the snow man up on the top, but Ella decided she needed to do some repairs – at least until her fingers got too cold. Being above the tree line at more than 12,000 feet was pretty amazing. 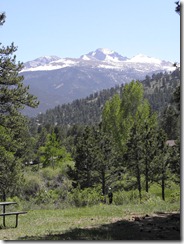 Back down to a mere 8,000 feet above sea level. Ella thinks that she may want to work at Rocky Mountain National Park when she gets older, especially when she saw that the staff lives in cabins in the park itself. Given that she wants to go to college in Boulder, I can see her possibly spending summers working at RMNP.

Next up, pictures of our trip over to Rifle on the western side of the mountains.

Posted by hokgardner at 8:48 AM

Gorgeous. So much to see in your lovely country, just hope I'm around long enough to do it. Who'd have thought, snow and it's boiling in Texas.