We are still in Atlanta – our trip has been extended by a week, which is a story for another day.

The kids are having a grand time being spoiled by their grandparents. My dad takes the kids to the pool every day, and they have all made huge strides in their swimming abilities. My sister took the big girls to see Harry Potter 7.2, which they all loved.

Grampa also took Campbell to a train store and a train museum, where they got to ride a real train.

While they were doing that, my sister and I took the girls to the American Girl Doll store – twice.

The first time was so that Ginny (Lily’s doll) and Hermione (Ella’s doll) could get their hairs did. Ginny’s hair was a dog-awful mess, with rats nests and dreadlocks thanks to Lily’s enthusiastic hair styling. The hair dresser had her work cut out for her. 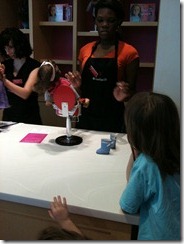 While the nice hair dresser was able to work magic on Ginny’s hair, she wasn’t as successful with the ink all over Ginny’s face and legs (thanks to Elizabeth).

After the hair appointments, we went upstairs to ride the carousel. It was Elizabeth’s first time, and she’s now a fan. 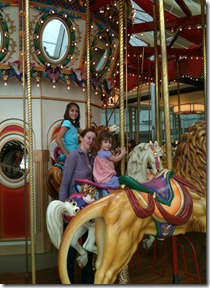 Lily and Ginny had a lovely time, too. 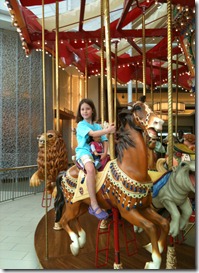 After the ride, we all had lunch while the girls’ dolls watched. Elizabeth’s new baby, named Baby Doll, joined her big sisters and babysitters. 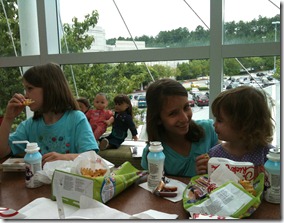 On Sunday, the big girls, Aunt Sarah and I headed BACK to the American Girl store for dessert at the Bistro. If you’ve never been, it’s quite a production. They have special booster seats for the dolls, who get their own cups and saucers. If a girl arrives without her own doll, the Bistro kindly provides a loaner.

Fortunately, Ginny and Hermione were able to join the fun. 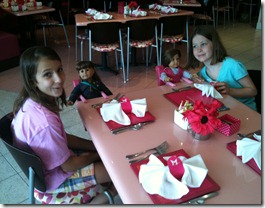 Lily and Ella each had an ice cream sundae as big as their head, and neither of them was able to finish it. They both made a valiant effort, though. 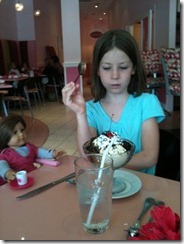 It’s been a treat to spend some time with my big girls while Campbell’s been occupied with Grampa. As much as I love that little guy, the boy energy level can be tough to handle. There’s no way he would have sat through lunch at a girly store.

Posted by hokgardner at 8:13 AM

wow you can really manage to take the worst pictures of me. but i'm glad the trip is fun.