How is it possible that three years have gone by since Campbell arrived? He had flipped himself breech some time in the three days before he was born, requiring an emergency c-section to get him out, and he hasn't stopped moving since. 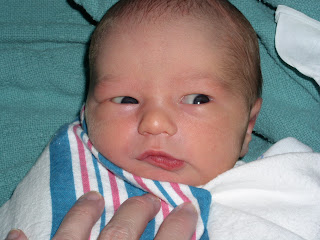 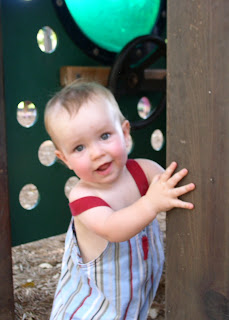 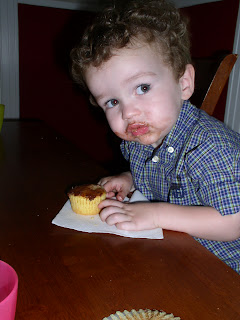 Second birthday, and not wanting to get his hands dirty with frosting. 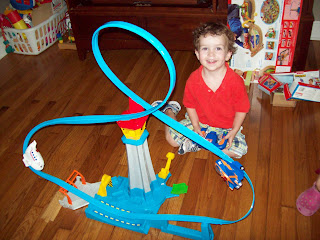 Campbell's birthday was actually last Thursday, but we lied to him and told him it was on Friday, which was when we celebrated it. Friday morning at the breakfast table, Ella and Lily sang Happy Birthday to Campbell and then asked him how old he was. He yelled, "Three o'clock!" B and I cracked up and spent the rest of the day shouting, "Three o'clock" at random moments.

In addition to the nifty airplane set above, Campbell got railroad tracks and remote-controlled trains that go along with the airport and a new bike. His tricycle was stolen a few months ago, and Campbell's been desperate for a new bike ever since. When I carried the bike into the house, the look on Campbell's face was just priceless. 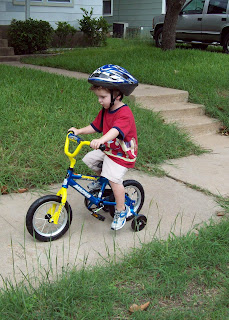 He's been on the bike pretty much ever since. We had to pull him off of it to have him blow out his birthday candles during the party with our neighbors. At 4:30 Saturday morning, he tapped me on the shoulder and said, "Peese, momom, peese. I go ride my new bitecitle? Peese?" When I told him no because it was still dark out, he said, "But I sayed peese!" I think if we'd let him, he'd sleep with his bike in bed.
Happy birthday little man. May the coming year be as good as the last one was.

Ah, little boys with curly hair. I had two (they're getting pretty big now). Is there anything sweeter than that frosting face! Happy Birthday Campbell!

Oh.My.Gawd. How adorable is he on his little bike?? Too cute!
Happy B day Campbell. :)

Happy Birthday Little Man! I remember when he was born. I think it was Pat who told me you had a boy.

This is so sweet. I love that you lied to him about his real birthday--we've done that before, too.

I loved that 3-7 age group. Old enough to do without nappies and capable of walking but still cute and hopelessly dependent. I'm glad he had a happy birthday and loves his bike! My brother bought my daughter a fabulous pink bike for her 5th birthday and she burst into tears and wouldn't ride it. To this day we don't know why she didn't like it!