Even though I haven't lived in Albany since I was in first grade, I still consider it my hometown. I've spent enough time there through the years, including one summer while I was in college, that I can get around pretty easily. I took these pictures on my trip up for my grandmother's memorial service. 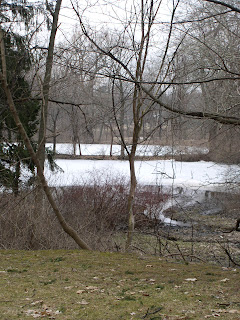 This is the pond in front of my grandparent's house. Actually, there are two ponds, divided by a small bridge of land. The second pond belonged to my grandfather's brother's property. I spent countless hours floating around on the first pond in the old rowboat, whacking carp on the head. I guess my parents didn't worry too much about my drowning, considering that the pond is probably four feet deep, max. After my grandmother's memorial service, my grandparents' ashes were scattered in and next to the pond. Given that the pond is still half frozen, we were a bit worried we'd be scattering ashes on the pond, not in it. 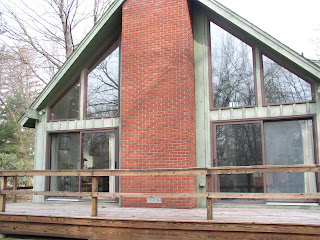 This is my grandparents' house. They built it almost 30 years ago, after selling the Big House. It very much has the feel of a cabin in the woods. During the summer, the deck would have furniture on it that we'd spend pretty much all day hanging out on. We ate countless meals out here in the evenings, with hamburgers cooked over my grandfather's gasoline-fueled fires. 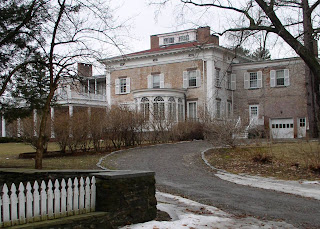 This is the back of the "Big House," which was my grandfather's family's home. The current owners were home, so I didn't feel I could walk around the front of the house to get a picture. My grandparents built their little house behind the Big House. I loved staying here when I was little; the house was magical. I'd wander off into the ballroom, which was shut up most of the year, and bang away on the grand piano. I'd explore all the closed-off bedrooms and storage rooms in the basement, which were filled with treasures like comic books and table hockey games. Or I'd spend hours on my perch in the window seat of the library reading. 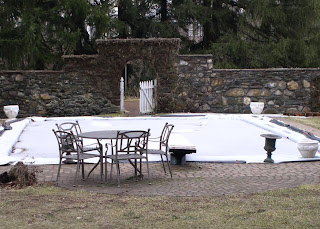 This is the pool where I learned to swim. It's part of the Big House's property and is between that house and my grandparents'. The pool seemed so big when I was little, especially when dad was trying to get me to jump off the diving board, but really, it's postage-stamp sized. The rock walls around it were part of the old stone barn. The whole property - the Big House, the pastures, the polo field, the ponds, the back fields - was once a working dairy farm called Wyebrook Farms. My dad and his brothers and step-brothers grew up working on the farm. 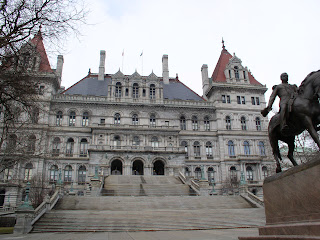 And finally, the New York State Capitol. It's a pretty cool building, but I've never seen it without scaffolding or cranes around it. You can't see it in the picture, but the south wing of the building is covered in scaffolding due to roof repairs. The building has 76 steps up the front and 17 steps up the back. When Teddy Roosevelt was governor, he used to walk over from the governor's mansion and run up the front steps. He'd grant an interview to any reporter who could keep up with him. The grounds were pretty quiet the day I was there, save a few vendor selling St. Patrick's day gear in advance for that afternoon's parade.

I love the double ponds, and the architecture of the little house. I can just picture the family times on that porch.

And the Big House? Wow. Quite the estate.