Tuesday afternoon things reached an unusually high level of chaos around here. At least one child had been confined to a bedroom, two more were fighting, and the fourth was complaining. At the same time, B and I were in the middle of our house-wide search for the car key (which is still missing). FeeBee was sitting quietly in the front hall, quite literally the calm in the middle of the storm.

Suddenly, Lily began screaming her head off. When we asked what happened, she managed to sob out, “She bit me!” B looked at me, and my heart sank. “Did you hear that? FeeBee bit Lily.”

Something was not right. Our perfect dog, who has never shown any sign of aggression with the kids, could NOT have bitten Lily. I looked at FeeBee, who was still in her spot in the hall, and started despairing at the thought of having to give up this wonderful dog, because as much as we love her, if it’s a choice between kids and the dog, the kids are going to win. (maybe)

Fortunately, Lily interrupted us, “No not FeeBee! Beanie bit me.” And sure enough, there were Elizabeth looking quite smug and Lily with a very clear set of human teeth marks on her arm.

Elizabeth got carried off to her room, screaming in protest the whole way, and FeeBee got an extra dog treat. How could we have doubted her for a minute? Just look at that face. 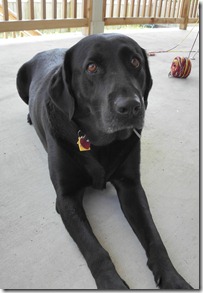 Posted by hokgardner at 9:24 AM

Oh how wonderful to have such a good dog. My beagle drives me up the wall with all the trouble she makes but she would NEVER hurt my kids so she has a home with us for life.

That is an innocent face if I've ever seen one :)