Life in a Small Town

I’ve had some trouble adjusting to life out here in the country. It turns out I really am an in-town girl at heart. Yes, it’s quiet and pretty, but the closest grocery store is 8 miles away. Just going to the quickie-mart to get milk is a major expedition. I miss being able to walk to the neighborhood store and school and park. I miss that it never took me longer than 8 minutes to get where I needed to go. Now it takes me 8 minutes just to get to the main road.

Things have been tough around Chez hok for the past few weeks. Ella is not doing well. My anxiety levels, which are high to begin with, are through the roof. As usual when I’m stressed, I’ve turned into something of a recluse. I go days without leaving the house and without speaking to an adult other than my husband.

This past weekend was the Dripping Springs Founders Day Festival (which really should be Founders’ Day Festival), and I braved the crowds and took all four kids in to town for it. I initially hadn’t even mentioned the festival to them because I didn’t want to make promises I couldn’t keep. But then the big girls came home from school Friday talking about how all their friends were going and some were going to be on floats and people on the floats threw candy and there were carnival rides and cotton candy and it was awesome.

I wasn’t sure what to expect in terms of traffic and parking, so we left the house with lots of time to spare. We ended up being there an hour early for the parade, and I decided to splurge on tickets for the carnival rides. 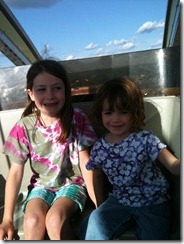 Lily and I took Elizabeth on her first Ferris Wheel ride while Campbell and Ella waved enthusiastically from the ground every time we went past. 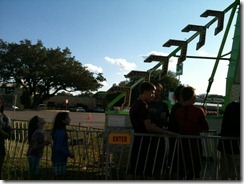 Then, against my better judgment, I let the girls go on some crazy ride that went around in circles AND upside-down. (If we had driven past this carnival just set up on an empty lot on Ben White, I would never have stopped and let the kids on the death traps of rides; they are set up by toothless carnies.) Lily declared it the best ride ever, while Ella said it was “kinda boring after a while.”

After that, we staked out our spots for the parade and I treated everyone to popcorn, cotton candy and sodas. As far as Campbell was concerned it was already the best day ever. Then it got even better.

We were right at the start of the parade, and all the kids on the floats had been sitting in the staging area for an hour, desperate to start throwing candy. So they were really enthusiastic when they were finally allowed to. There were times I had to cover my face to keep from getting hurt. Ella said they were throwing it AT us, not TO us.

I figured each would get a few pieces of candy hoped they’d be happy with what they got. Little did I know. 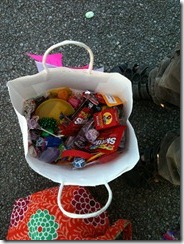 This is Campbell’s bag of loot – more than he got at Halloween – and each kid had a similar bag. Campbell and Elizabeth loved scooping up the candy so much that I kept having to pull them back onto the curb and out of the way of the floats. 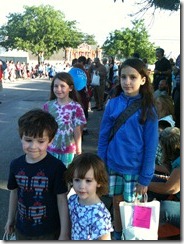 Ella took the diving for candy very seriously. Lily wasn’t afraid to knock little kids out of the way to get to the good stuff.

Aside from the candy, the parade was just awesome. So awesome that I cried, a lot. After so many weeks (months) of stress, just being outside on a gorgeous Texas spring night with the kids and having fun made me furiously happy. The parade was the epitome of the small town event. 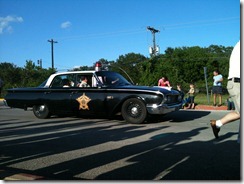 There were old police cars. 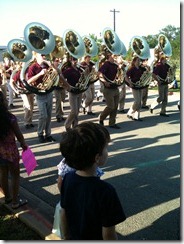 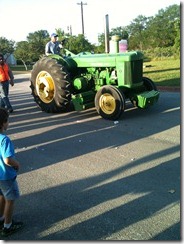 There were lots and lots of tractors 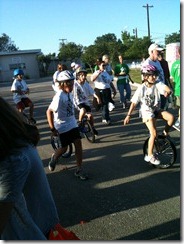 And about 50 kids on unicycles 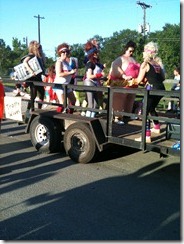 And a few folks in tacky exercise outfits

Through all of this, I was texting one of my best friends, and I told her it was all so wholesome and fun that I couldn’t think of a single snarky thing to say. I couldn’t even say anything about the number of women wearing bedazzled shirts.  Everyone there was completely in the spirit of things and enjoying themselves – no ironic hispters to be found.

While Ella and Lily were on an another scary dangerous ride, I watched gaggles of teenage girls go by, giggling and pointing and shrieking, and thought about how my big girls would be in one of those groups before too long. And I may have gotten weepy again.

We finished out the evening with some more rides, including Campbell’s favorite, the “Sooper Swide.” As we headed back to the car, Ella, out of the blue, asked, “Next year, when I’m in 6th grade, is this the kind of thing that I can come to with my friends and not have you follow me everywhere?” It’s like she had read my mind. I told her absolutely, next year I won’t follow her around everywhere.

Or at least I won’t follow her too closely.

Posted by hokgardner at 1:08 PM

50 kids on unicycles? Maybe Austin is creeping in on the country. Sounds like a great time.

That's not just "a marching band". The DS Tiger marching band has won the state UIL marching championship the for each of the last 3 years in which 4A bands have been eligible to win. Their music is composed and arranged just for them, to go with the large custom props designed each year to tell the story/convey the theme. They have 5-6 buses and an 18 wheeler in the convoy at competitions and dwarf big-city bands. Kids are carefully assigned to sections in 6th grade and the middle school programs work hard to get them ready for success at the top level of high school competition, which happens every year. This year's show was about burning books and intolerance, and featured Farenheit 451. The color guard costumes were fire fighter coats shed at one point for dance costumes underneath. They're fun to watch, but difficult to compete against because they win such high scores in every category. Lots of work and time if your kids are in band, but then they can say they won state each time.

I was nearly in tears reading it.

Sounds like it was exactly what everyone needed. Way to make it happen!