We did have some fun

Contrary to what my last post may have said, Ella and I did have some fun in Colorado Springs. Chronic insomnia, a cold, a cranky child and scary hotels tend to make me a little punchy.

We arrived in Colorado Springs early enough on Thursday to have brunch at this great little family owned restaurant in the downtown area. I hadn’t eaten before we left the house at 4:15 am, and that was the best damn bacon, egg and cheese omelete I have ever had.

After brunch, we checked into Hotel Hell and then quickly escaped. We drove up the Pikes Peak Highway, which was closed at mile 13 because of the weather. It snowed! I forgot just how magical falling snow can be. Ella was beyond thrilled by the snow. She kept saying, “I can’t believe it’s snowing. It’s so amazing.”  It snowed again Thursday night and through part of the day on Friday, and I loved every minute of it.

The best day, though, was Monday. After Ella finished up some school work, we checked out of the hotel and headed to the Garden of the Gods. The weather was absolutely spectacular, and we had a lovely hike and then lunch on the terrace of the Visitors’ Center. 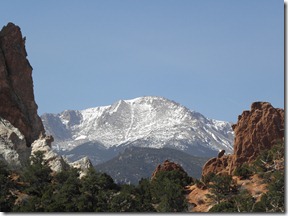 Pikes Peak in the distance 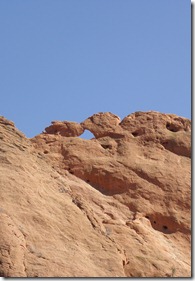 The “Kissing Camels.” In all honesty, this is the only rock formation where I could actually see the relationship between the name and the rocks. 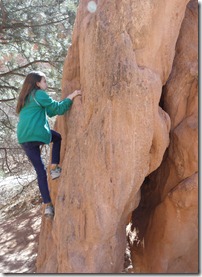 Ella wished she had brought her climbing shoes. She’s now ready to learn to lead climb and have me belay so we can go back and she can do real climbing. 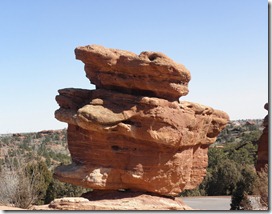 Balancing Rock made me nervous. 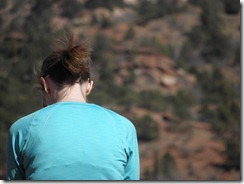 I don’t know why, but I really love this picture Ella took of me at Balancing Rock.

After lunch, we drove into Manitou to check out the Cog Railway. Unfortunately, it was in the middle of a trip and we didn’t have time to wait for it to come back. I also fell in love with Manitou. If we ever have to go back to Colorado Springs, I think we’ll stay in Manitou and commute. Colorado Springs just seemed so seedy. Manitou was really pretty with lots of cool shops and an historic district.

Since we couldn’t take the Cog Railway and we hadn’t made it to the summit of Pikes Peak earlier, I decided we’d give it another try. When we got to the entrance, the ranger said that road was closed at Mile 17 but that the drive was still worth it. And boy was it ever.

Once we got up above the tree line, the views were breathtaking. And it turned out that the road was open all the way to the summit. 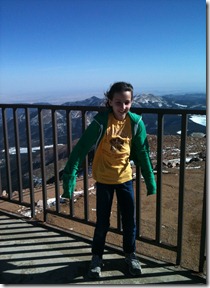 Unfortunately, it was also 28 degrees with howling winds, so we didn’t last long. It turns out that the Cog Railway wasn’t running to the top, so if we had taken it instead of driving, we wouldn’t have made it to the summit.

After we got off the mountain, we had to head back into Denver to catch our flight home. I must say, it was nice to walk out of the airport in Austin and smell the Mountain Laurel trees in bloom. I love Austin in the spring.

One last thing. There’s an “amusement park” right at the turn off to Pikes Peak Highway called North Pole Santa’s Workshop. It was still closed for the season (I guess it’s where Santa spends his summers), so we could only see the parking lot. But this guy was enough to make me not want to go in. 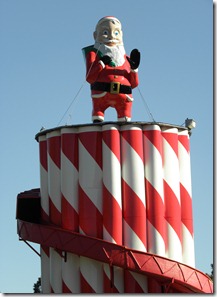 He’s like the Santa you threaten kids with – “Be good or else this guy will come to our house!”

Posted by hokgardner at 7:17 PM

I spent several months in Colorado Springs about 18 years ago as a work project. It's not a bad little town, but it does tend toward the seedy side. Glad you got to go up Pike's Peak - I always warn people to take a coat because it's COLD, even in July and August. I never actually went up, because I was newly pregnant with my first child and I was worried about the altitude. Good to hear you had some fun, your last posts didn't exactly boost tourism there!