But not about the marathon, I promise.

I actually did a lot more in New York City than run. I went with two of my best friends, and we lived it up.

We arrived on Friday, and after I made a pilgrimage to Central Park to see the marathon finish line, we hit the town. 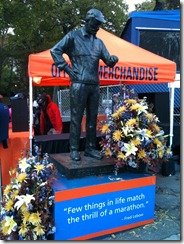 Our first stop was to see Pee Wee’s Playhouse on Broadway. The show was still in previews, so it had some rough spots. Despite that, it was a whole lot of fun. I smiled through the whole thing. A funny aside – two women edged their way into the row in front of us and then carefully encased their seats in clear plastic trash bags. A woman sitting next to then turned around and said, “Either they’re afraid of bedbugs or they have weak bladders.” We all cracked up, which probably wasn’t nice, but the women really did look ridiculous.

After the theater we walked for what seemed like hours and found an amazing Italian restaurant in the Hell’s Kitchen area. I had asparagus risotto that was divine. I wanted to lick the bowl clean.

Saturday was low-key. I went to the marathon expo, which was a zoo, so I grabbed my race packet and headed back to the apartment. On the way, however, I found a great little yarn store called Knitty City and spent too much.

That night, I fulfilled another longtime dream and watched fireworks over Central Park. My friend H and I parked ourselves on the steps of the Natural History Museum, right below the statue of Teddy Roosevelt, and had a great view. 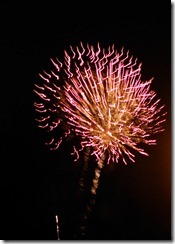 On the way home, we stopped at a cool bakery for some treats. I resisted these cupcakes and opted for a black-and-white cookie instead. 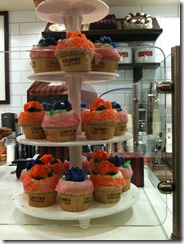 Sunday was the marathon, which I’ve already written way too much about.

On Monday, my other friend, L, and I took a Circle Line cruise around the island. In the months ahead of the trip, spending three hours on a boat seeing a different side of the city seemed like a grand idea. But on the actual day – not so much. The weather was terrible – rain, wind, sleet – so we were trapped inside the boat. I made brief forays on deck to snap pictures, but I never lasted for more than five minutes. Unfortunately, the part of the tour I was looking forward to most – the Harlem River around to Spuyten Dievel and then the George Washington Bridge – was cut out of the tour due to bridge construction on the Harlem River. So the boat had to double back. Seeing all the bridges, Gracie Mansion, and the UN wasn’t as interesting the second time. Even the tour guide, who had been excellent up until that point, seemed bored.

After the three-hour tour, I went to Purl Soho, a famous knitting and fabric store. I wasn’t that impressed, given the store’s hype. The place is very small, and it’s half fabric, half yarn, which means they don’t have a huge selection of either. I did still manage to buy some yarn, though.

Monday night, I met Marinka and Kelcey for dinner, which was a blast, except for the fact that I had a raging case of vertigo from the boat ride. I spent most of the meal gripping the edge of the table to keep myself upright. I was even present for the now-famous “Ma’am” debate. I was a bit worried that one of them would channel Teresa from RHONJ and flip the table, so I kept a firm grip on my plate just in case.

The perfect weather returned on Tuesday, so H and I started the day with a walk in Central Park, visiting the Reservoir, the Shakespeare in the Park theater, and some playgrounds. I love Central Park.

H headed back to the apartment to pack, but I ventured over to the Natural History Museum for an hour, which was just the right amount of time. There are only so many dioramas and taxidermied animals I can look at. The museum was showing a movie called “The Race to the End of the Earth,” about polar exploration, which I would have liked to see, but the show times didn’t work for me. Same thing with the planetarium. Maybe next time.

Some other random pictures, and I promise I’ll shut up already about the trip. 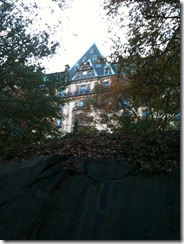 The Dakota, where John Lennon lived until his death. 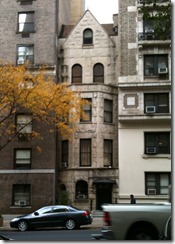 This teeny building was down the street from our apartment. I would have loved to go inside. The rooms must be so small. 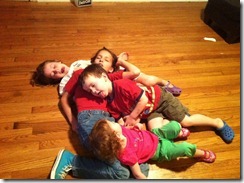 And, finally, a picture B sent to reassure me that the kids were all alive and well.

What a trip. You made the most of it. That dinner sounds like a blast!

Great pictures! and it was so great to meet you.

So great to finally meet you!!! Glad you enjoyed nyc.

I have LOVED hearing about the trip. Post as much as you want to - I'm not bored!

I'm excited about your adventure and think it's absolutely inspirational that you did this - especially as a mom! You're truly amazing. :)

Is it appropriate for an Antipodean to say 'I hate you right now' Yep, think so.

Sounds like you had a pretty great NY trip. I had forgotten how good the view is from the Circle Line. I haven't been on it since third grade. You got some great pictures!