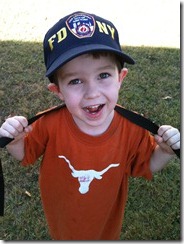 I am totally loving Campbell right now. Four is such a good age with him. He’s fairly independent – he can get dressed and go potty all on his own – but he still loves to snuggle and hold my hand. His enthusiasm about pretty much everything in life is infectious.

I wish he could stay four forever. Apparently he heard me say that, which sparked this conversation:

C: Why do you want me to stay four?

H: Because you are a great four-year-old and lots of fun.

C: But on my next birthday, I HAVE to turn five.

C: I’ll be a great five-year-old. I promise.

H: And this is exactly why I want you to stay four.

The other day in the car, he asked if I had won my “big race” in New York. When I told him no, he informed me that I needed to go back and try again and win this time. I said that I needed more practice, and he decided that I was allowed to practice a lot more but that I did need to back and win next time. I told him I’d get right on it.

One day, when he was being particularly cute, I told him he was going to have lots of girlfriends. His reply? “That’s good. Because I like girls. But I only have one girlfriend, and her name is L. She’s my favorite girl.” Fortunately, L is the daughter of one of my best friends, and she’d make a great in-law.

My mother-in-law took the big three on their annual shopping trip for Christmas outfits, and Campbell came back with a spiffy number that included a sweater vest and a tie, of all things. According to my mother-in-law and the girls, he really did pick it out on his own. Campbell wore the tie through the store, over his Thomas the Tank Engine shirt, until his grandmother took it off to pay for it.

When he got home, Campbell had to put the tie right back on. Then he asked if could go to L’s house to show it to her, because he knew she’d like it. I can’t believe he’s four and already worried about dressing to impress.

Last night, the kids were doing artwork at the kitchen table. Campbell brought in this picture. 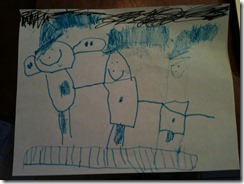 I asked him to tell me about it.

C: It’s you and me and Elizabeth.

H: Do we all have belly buttons?

C: Yes. Yours is the biggest.

H: Thanks for that. What’s between our legs?

H: But Elizabeth and I are girls, and we don’t have penises.

C: Oh. Yours aren’t penises. Yours are tails that are taped on to you, like cat tails.

I was particularly impressed with how quick he was to change the story. He’s a smart little dude.

If only he could stay four forever.

Oh, but you so did win your big race in NYC. I even wore the medal to prove it. He's adorable. He wears four well!

Oh my gosh, yes, if they could stay preciosly 4.

Hahaha! I don't know what I like better...the chicken truck comment or the penis story. Good stuff!