Everyone keeps asking if the marathon was fun, and that’s a tough question to answer. Because running for more than five hours isn’t fun. And miles 14 through 17 were the exact opposite of fun. I don’t think I could describe the day in one word. So I’ll do a re-cap.

I left the apartment at 6:00 and hopped on the subway. At each station, more and more runners got on, giving each other nervous smiles. I chatted with a lovely woman from Toronto. After the subway, I got on the Staten Island Ferry, which was filled with runners. If you could have harnessed the collective nervous energy of the thousands of runners, you could probably power the whole city for a day. I am very glad I was assigned to the Ferry; it was a cool way to head to the race, watching the sun rise over Brooklyn and the Verrazano Narrows come into view. As we lined up to take the buses to the start, the Statue of Liberty was right there. No matter how many times I see her, she’s still awe inspiring.

I was assigned to the last corral of the second wave, so I was at the very back of the pack at the start, which was just fine. I'd heard that the front was like a running mosh pit, and given my tendency to panic in crowds, I was glad for the breathing room. I was even happier to be at the back while running across the bridge. The view from the bridge was spectacular – all of New York was laid out in the distance. A cruise ship had just come into the harbor under the bridge, and two cargo ships were lined up to leave. One of the Fire Department fire boats was right beneath us, spraying huge fountains of water. For a brief moment, I regretted not having a camera with me, but then I realized that no picture could ever accurately and fully capture the scene, so I drank it in as a ran.

Running through Brooklyn was really cool. The different neighborhoods turned out in full force to cheer us on. At some points, there were so many spectators lining the streets that it was like running through a tunnel of sound. The Williamsburg section was a bit surreal. A large number of Orthodox Jews live there, and they were out watching – the men with their black hats and ear curls, the women with their long dresses and hats – but they were silent. The little kids, though, were going nuts. It was just such a contrast after the noise of Park Slope.

Turning on to First Avenue after the death march on the 59th Street Bridge was a life saver for me. The mass of sheer humanity moving northward, both the runners and and the spectators, was an incredible sight – bobbing heads as far as I could see.

Several times during the race, I ran behind groups from Achilles International, and they were just inspiring. One group was escorting a blind runner – with one guide holding on to a tether and three guides keeping the path clear for him. I also saw Achilles International guides escorting wheelchair and amputee athletes. One group was running with a man who was blind and deaf – it was his 13th NYC Marathon. I saw him at mile 24, so I think it’s safe to assume he completed his 14th. This is group I want to be involved with. Being able to share my love of running with others who otherwise might not be able to run races would be a wonderful way to run.

As I was running through the Park, at about mile 25, my aunt and uncle spotted me. Seeing them was a much-needed boost at that point. As was giving two little girls high-fives on Central Park South.

Finishing the race was such a joy and a relief. All the months of work and worrying and planning had paid off, even if my time was slow. When the volunteer hung my medal around my neck, I gave her the biggest hug and started crying for real. She gave me a hug back and got me moving again, which was a good thing. I really, really wanted to sit down.

I had arranged to meet Heidi and Lisa, my good friends and pit crew, at the steps of the Natural History Museum, and as I staggered up the hill from the Park to the Museum, I kept repeating, out loud, “Please let them be there. Please let them be there.” And the were – jumping up and down and cheering for me. I got all teary again.

Me and Heidi after I finished

When we got back to the apartment, I found a banner made by our neighbors and their kids. They had sent it along with Heidi and Lisa, who had hung it up while I was running. This is my favorite part of the banner. 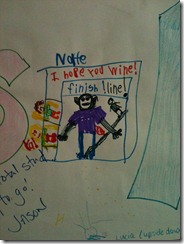 Monday morning, I went to the marathon store and splurged on a finisher’s jacket and shirt. I wore the jacket for the rest of the trip, but I did take off the medal. 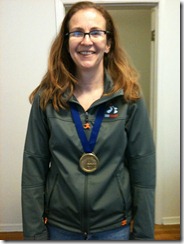 I could go on and on about the marathon, but I’m sure bored everyone to tears at this point. So I’ll end with another heart-felt thank you to everyone for all of your e-mails, comments and texts of encouragement, support and congratulations. They really did make a difference.

not boring at all, I love hearing about it.

Congratulations. That is simply amazing. I loved hearing about Achilles Int- how cool to see something like that in action. Very inspiring.

What a cool thing you've done.

Huge congrats! How exciting for you and everyone supporting you.

OH Good on you girl. I couldn't run for a bus so finishing is quite an achievement, especially with all the illness and stuff leading up. I hope you didn't wine but you deserve one after that congratulations!