I had been feeling very much like a neglectful and unloving parent the past few months. Any time another mom asked me what sports my kids did, I'd talk about Ella's climbing and Lily's ballet, and then I'd trail off. I had never enrolled Campbell in any kind of sports or classes or anything.

So when the e-mail from the Dripping Springs Youth Sport Association arrived announcing registration for spring soccer, I signed Campbell right up. When I told him, he protested that he didn't know how to play soccer, and he wasn't comforted by my suggestions that maybe no one else on the team would either. 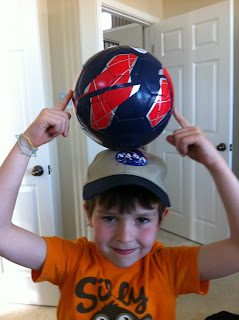 But then we went to get his soccer gear. He wore his shorts, shin guards and cleats everywhere and carried his soccer ball with him. 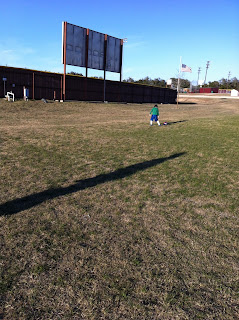 On the day of his first practice, he asked me approximately eleventy-mabillion times how long it was until we left. During the practice he ran and laughed the entire time. I'm not sure he had any idea of what was actually going on, but he had so much fun. 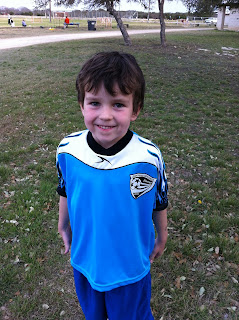 The night before Campbell's first game, B gave the kids the option of staying up late and watching a movie. Campbell announced, in all seriousness, "I should go to bed on time. I do have a soccer game in the morning." And then he went to bed.

Unfortunately, he poked me awake at 5:15 whispering, "Mom! Mom! Don't forget! I have a soccer game this morning." He was not happy when I told he we still had four hours before we needed to leave.

B took Campbell to the soccer game while I was at ballet with Lily. About halfway through I got a text that said, "This is what Muppets would look like if Muppets could play soccer."

That afternoon, Campbell and I talked about his game.

I think soccer's a success.
Posted by hokgardner at 10:11 AM

Love it! Sometimes we have to push a bit to get them to try something new - William was/is the same way about soccer. Very reluctant at first, but then has a blast. If I ask him during the off season, he's as likely to say he doesn't want to play as that he does. But he always seems to have fun.

That is one happy boy---but just in case, they should keep handing out popsicles!

Glad to hear that he loves soccer. I hope he sticks with it!