Waiting for her wings

Lily is in Ballet Austin's production of The Nutcracker again this year. In the days before the auditions, she was very blase about the whole thing. "I'll probably just be an angel again." On audition day, all the girls got crowded into one room to wait for their turn. I think you could have powered a small city with the combined energy of 80 anxious ballerinas. I fled the room because the noise was overwhelming.

When the director walked into the room, the girls were instantly silent, and they all put on their very serious ballet faces. Then they walked off to the theater without us, looking like the pros they are. 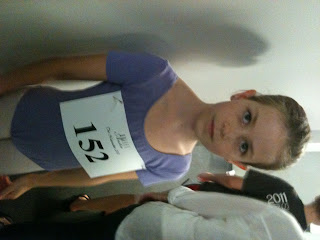 Last year I was a wreck waiting for the cast announcement. And this year, I wasn't much calmer. Ballet Austin e-mailed the cast list instead of making everyone drive downtown, and my heart just about jumped out of my chest when announcement arrived.

Much to my relief, Lily's name was on the list. There was a lot of excited jumping up and down when I showed Lily the e-mail, but not quite as much as last year. "I knew it. I'm an angel again." I reminded Lily that being in the Nutcracker was a big obligation in terms of time and money and told her that if she didn't want to be an angel, she didn't have to be.

She quickly reassured me she wanted to be an angel.

This past Sunday I had to drag Lily out of her sickbed and take her in for official photographs. I may have gotten a little weepy watching her get dressed up. The girls were all helping each other with their belts and halos while the moms stood around and took pictures. They all just looked so sweet. 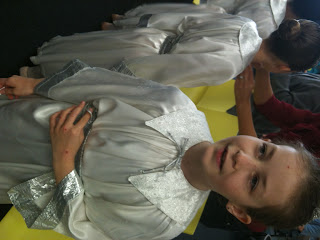 Mom, the loops go on the side. Because there's a snap in the back for the wings that needs to line up. Duh." 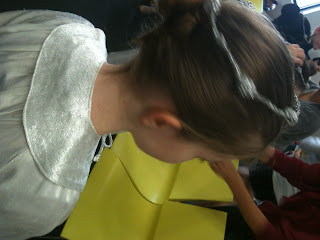 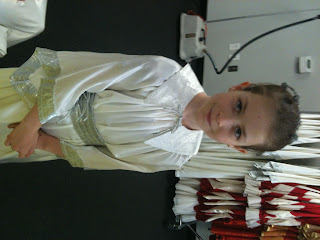 I have to go now, mom. Stop taking my picture.

Last year Lily's debut in the Nutcracker got lost in the chaos of moving. I was frantically packing and unpacking boxes in between trips to Palmer to drop her off at the stage door. We made it in time to see one performance, but just barely.

This year, however, she is in four performances over two weeks, and we can make a big fuss. I can't wait.
Posted by hokgardner at 2:21 PM