Yesterday, Elizabeth was particularly honey badger-ish. I spent most of the day telling her not to do things, pulling her off things, and taking things away from her.

The final straw was when I found her attempting to pick the lock on my bedroom door, which wasn’t locked, with strands of uncooked spaghetti. There was a trail of broken noodles across the house and a bunch jammed in the little hole on the doorknob.

I hauled Elizabeth upstairs and dropped her into bed. While she was screaming, I told her she had to stay in her room until I said she could come out. I hadn’t even gotten downstairs before she had already poked her head out, asking to be released from confinement.

I told her to go back into her room, and I went in my room to read. Not ten minutes later, Ella came in laughing hysterically. 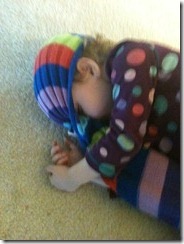 Elizabeth was sound asleep at the top of the stairs, sweater wrapped around her head.

Don't worry, I predict she will be he one who cares for you whenyou are old. This effort will pay off!

I agree with Becca. And I always found my kids were most defiant when they were exhausted. As soon as you made them stop for a moment, they passed out.

How cute! My daughter used to fall asleep mid-tantrum.
:-)
Traci