As I have mentioned before, we are not a religious family at all. My kids' only real religious instruction comes from attending a very liberal, tree hugging preschool housed in a Methodist church on the UT campus. We are far from the only family at the school to not attend church, but I’m thinking we may need to, just for the sake of cultural references.

Campbell’s class is doing a little Christmas pageant tonight, which includes a few songs and a re-enactment of a scene from “The Little Drummer Boy.” I got to watch rehearsal, and I spent an inappropriate amount of laughing, but in an affectionate, I love these kids, kind of way. (But maybe not this kid.)

The kids all have roles – angels, wise men, shepherd, Mary, Joseph, drummer boy - the usual cast of characters. Campbell has been assigned the role of Joseph, and as I was helping him into his costume, he asked who Joseph was.

The best I could come up with was, “Joseph was Jesus’s dad. Except not really. God was kind of Jesus’s dad. I guess Joseph adopted Jesus and raised him. He was married to Mary, who was Jesus’s mother.”

I sort of sputtered out about then, and the preschool teacher stepped in, adding, “Joseph was Jesus’s earthly father.”

Yeah, I’m going to hell for sure. 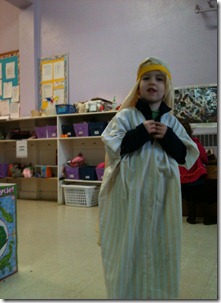 But at least I have a cute little Joseph.

Posted by hokgardner at 8:15 AM

Hey you did better than I ever could.

"Joseph is my friend who is married to Jason."

NOW who's going to hell?

And Mary his earthly mother. What about that, huh? ;)