A year ago today, I was crowded in with 55,000 other runners on Staten Island, waiting to start running the ING NYC Marathon, something I’d dreamed of doing since I first watched Greta Waitz dominate the race in the 80s. 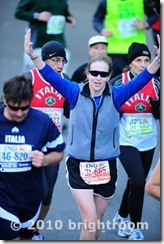 I would love to say that I enjoyed every minute of the run, but miles 13-19 were pretty miserable, probably the hardest six miles I’ve ever run. However, the overall experience was amazing.

After I finished, one my friends asked if I wanted to run it again, and I said no. Turns out I can’t be held accountable for anything I say in the two hours immediately after finishing a marathon.

On the day after the run, I was at the marathon store in Central Park, and there was a kiosk set up for entering in the lottery for the 2011 race. I briefly thought about signing up, but then I got distracted by legs screaming in protest at being asked to walk.

Throughout the winter I dithered over whether to put my name in, taking so long to decide that I missed the deadline. And honestly, the past nine months have been so difficult that there is no way I could have trained for the marathon. And having the stress of training for the marathon during the summer, which was miserable what with the heat and the housing chaos and overwhelming depression, would have just made things worse.

Even though I’m much better now and running regularly, there’s no way I could have gone to New York this weekend. We still don’t have a house to move into, and all of our belongings are in storage.

And yet, how I wish I was there this weekend. I’m watching all the tweets from the official INGMarathon feed and from participants waiting at the start, and I am dying with envy. I’m typing this as I watch a live stream of the race. It’s a perfect day for a marathon.

So I’m putting my name in the lottery for next year’s race. I want to go back and give the course another shot.

Besides, I need a better finisher’s photo, preferably one where I don’t look delirious. 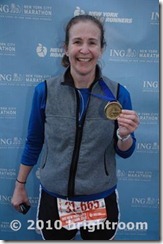 Posted by hokgardner at 8:16 AM

I am not a fan of running (and I've tried, because I think it sounds so cool to say "Yeah, I ran a marathon").

I imagine running a marathon is like giving childbirth...you forget the bad part when it's over!!

Do you think everyone can run?

Can you write a book, "running for the non runner?"