In her happy place

This past Saturday, Ella and I woke up before dawn and drove out to Enchanted Rock so that she could climb in the Granite Gripper, her very first competition in the wild.

The climbers were released to climb at 9:00 am and told to report back with their score cards by 5:00 sharp. And off we went. Our coach, who was one of the event’s coordinators, rounded up a great climbing guide for our group since we had lots of younger kids and no adults who climbed. All the other climbers teamed up in groups of at least three.

It was such a good day. The weather was perfect. We hiked up and down and back and forth. I felt pretty good about being able to hike past a group of Boy Scouts who had collapsed in the middle of the path about halfway up.

The best part, though, was watching Ella. She smiled the entire time. She also climbed the entire time, even when she was supposed to sitting, waiting for her turn to climb. Ella climbed all of her routes, and some were tough, without falling.

When she was in the bouldering area, she pulled off a climb that had stumped a bunch of 20yo guys. The clapped politely and then started muttering something about Ella’s being able to climb the problem because of her muscle to weight ratio. That’s when our coach’s wife rounded on them and said, “I am so sick of guys like you claiming the only reason she climbed that problem was because of her muscle to weight ratio. You know that was a hard climb.” They had the good sense to look at their feet and kick rocks in an embarrassed manner.

Once the climbing finished, everyone gathered back at the Pavilion for a group dinner, raffle, and silent auction. Ella won a great messenger bag in the raffle that B and I keep trying to steal. We also won a Metolius Hang Board in the silent auction. Ella plans to hang it over the door in her new bedroom.

Ella ended up winning her division, which meant she got a cool trophy and $100 in cash. I could see the smoke coming out her ears when people asked her what she was going to spend it on. She thinks she might buy a slackline, because what else would an 11 yo girl buy with her loot?

As we drove home at 8:00 pm, Ella declared it “the best day ever” in her life and made me promise she could go again next year.

I am beyond grateful that B and I have found, with the help of a neighbor, what Ella loves to do and that we are able to support her doing it.

Pictures like this one taken by one of the team moms, make it all worth while. 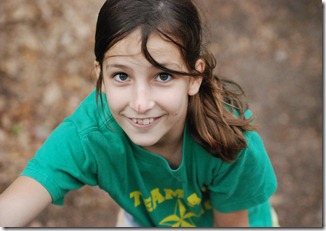 She was truly in her happy place.

Posted by hokgardner at 7:46 AM

She wants to buy a slackline, that is awesome.
Gratz Ella!

Your kids hot like me.and my sisters child we have together she wets or bed its so hot sis knows I love it she woke to me and our kid going allthe way it smells like toddler Pee.and pussy love it so much